By Mikhel Proulx No: 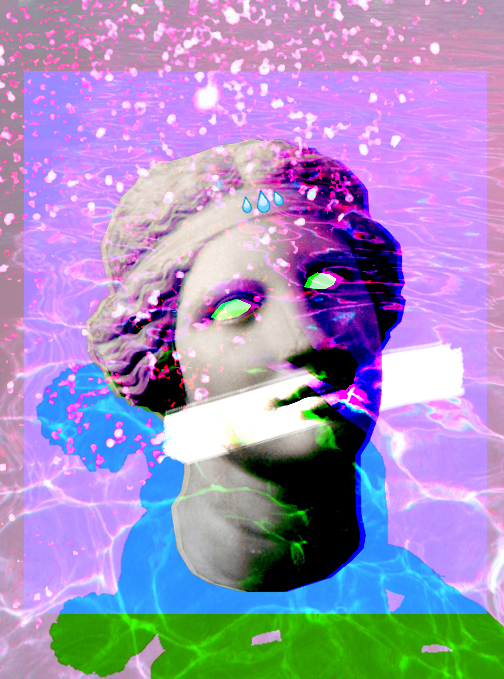 Queers on the early Web found each other across cultural and material borders to create online identities, develop novel forms of pleasure, and create networked cultures. This idealistic era promised that homos and genderqueers would find emancipation in online communities, which would embrace our ‘true’ selves that we might otherwise hide in ‘real’ life. Twenty years after the birth of the modern Internet—in this era of Grindr, amateur porn, and selfies—such rosy prospects are now balanced by a sense of the limitations of the technologies that we have integrated into daily life. We are reticent of the online promise to transcend our offline selves—raced, sexed, classed, and gendered as they are.

The artists and writers invited for Queer Networks, issue #32 of .dpi, are concerned with such complexities of selfhood. Together, they consider how gender and sexualities are shaped and depicted by digital media, and also how challenges to technological protocols have been formed by critical artists, designers, and users online.

Queer Shibboleths, Kathleen Fraser’s study of language used in online Queer networks, highlights how specific vocabularies have developed in online Queer spaces throughout the history of the Internet. Such language signals allegiances, creates values, and builds forms of knowledge. Her research appreciates how online networks of sexual minorities have—at the level of language—fostered both group solidarities and forms of self-identification.

Such forces are at play in the case-studies considered in the collaborative essay by Alicia Eler and Brannon Rockwell-Charland. They argue for the potentials of the blogging platform Tumblr to foster novel forms of self-identification for Queer women and girls of colour. In the ability to generate, replicate and spread online media, the authors find that Tumblr users have been empowered to cultivate non-normative femininities and lasting forms of kinship between Queer girls.

In Personal, a video collage created by Dominic Burkart and Wolfgang Bucher, two figures—a teenager and a middle-aged man—perform a camp ritual through video correspondence. We see each body nude, isolated and fragmented, and engaged in some form of cyber-foreplay—where the clean surface of the monitor contacts pimpled or hairy skin covered in liquid personal lubricant. The ritual parodies how so many of us perform our bodies for webcams, and more generally how we identify ourselves in terms set by digital media as sexualized, desirable images. Personal alludes to this power of self-imaging, and also to Queer intergenerational encounters.

The artist and researcher Tom Penney writes from his own situated experience about self-imaging in his study of fascistic behaviour in online gay sex networks. In reading affect into representations of faces and bodies, he argues that such behaviour is pervasive in the visual cultures of these networks. Here, we fashion self-imagery that coheres to illiberal norms, to perform ourselves as desirable images.

OKLucid was created after the artist Ianna Book—a gorgeous, tall, blonde woman—joined a popular dating website. Having received many advances from possible mates, Book recorded each response sent to her after she outed herself as transsexual. OKLucid reproduces these text responses and reveals alternately the fascination, acceptance, ignorance, and aggression that individuals bring to online dating networks. Opposing a sense of the Web as inherently open and tolerant, Book reveals how offline attitudes—including both tolerance for and violence against many trans and gender non-conforming people—extends to online spaces.

A personal essay by the pseudonymous R.A. Taylor explores how both bodies and finances are policed in the network age. Rooted in his own experience as a transgender sex worker, Taylor explores both the oppressive barriers of late capitalism, and instances of networked activism against these barriers by trans sex workers.

In i need to feel endless in both directions, Jessica MacCormack has compiled an annotated image cascade that pulls irreverently from high art and pop culture. The results cut across varied themes: global capitalism, terrorism and war, decolonial and racial politics, mental health, and celebrity culture. In this compilation (as on her popular blog) we witness an ambiguous engagement with online meme imagery: it appears as either the blogging of an earnest teenage girl, or a sarcastic critique of networked culture. More unsettlingly, it is likely an uncomfortable straddling of both extremes, and embodies the collapse of source and context that affects image-sharing cultures online.

Benny Nemerofsky Ramsay points to longer histories of Queer networks, writ as they are in kinships, communities, literature, and intellectual thought. His contribution to .dpi #32 has manifested as a photographic series documenting a sensual exploration of the dense, private library of a pair of Queer Dutch scholars. Created during his research for the creation of an audioguide in this unique space, Nemerofsky’s series records this research—itself something of a Queer network. Here, he links themes of gender and sexualities within the library shelves with views beyond its walls—through exchanges with local men met online through a mobile sex app.

Together, the artists and writers in Queer Networks consider how gender and sexualities take shape online. We see this in performances of the self, in social and political networks, and in new forms of companionship, romance, and sex. Through the thoughts collected in this issue, we may appreciate how Queer, networked modes of being pose alternatives to the structured and streamlined spaces of the contemporary Web.

Mikhel Proulx is a cultural researcher of contemporary art and digital visual cultures. His research considers Queer and Indigenous artists working on the early Web. He holds a BFA in Drawing from the Alberta College of Art and Design and an MA in Art History from Concordia University, where he is currently developing his PhD. He is the 2015 Jarislowsky Foundation Doctoral Fellow in Canadian Art History. His artworks and curated projects have been exhibited across Canada, Europe, and the Middle East.