By Kathleen Fraser No:

Shibboleths signal and define the limits of self-policed spaces in academic, corporate, cultural, and identity-based realms; in queer spaces, the shibboleth has even greater significance, as jargon is often used to signal depths of knowledge and sensitivity, indicating not just membership but safety and alliance. This essay explores the role of the queer shibboleth in constructing and maintaining organic queer enclaves online, as online community-building shifts from siloed spaces (dedicated gay websites) toward permeable social groups (on social sites like Tumblr). It also examines the role of online communities in rapidly disseminating queer institutional knowledge that can then be enacted in face-to-face interactions.

In 1991, writing about internet relay chat users—among the first communities to come unmoored from physical space in the sense that is now familiar to internet users—Elizabeth M. Reid wrote, “Groups of people who fail to communicate do not compose a common culture.”[1] Groups that share culture by necessity share language, and this shared language itself becomes part of that group’s cultural identity. For online communities, which don’t rely on proximity or synchronicity but on shared discourse, language constitutes the entirety of communal interactions and also marks community boundaries. Likewise, queer communities have often carved out spaces, histories, and vocabularies that run parallel to those belonging to mainstream identities. Where queer communities and online communities exist in tandem, there is fertile ground for shibboleths: parallel spaces are created, protected, and disseminated by means of their corresponding parallel jargons, all expedited by the social functions of the internet.

As shibboleth is used in this essay, it primarily refers to words or phrases in particular contexts that allow members of a niche group to recognize one another and establish alliances in spaces where members of this niche community and members of the mainstream interact, and where the values of the niche community may be interpreted as non-normative or even threatening. As these alliances grow in membership, creating communities collocated with but separate from mainstream communities, shibboleths help new community members discover and recognize these safe enclaves.

Shibboleths signify any number of things to the linguistic communities that use them—familiarity, exclusivity, indoctrination, safety. They are signposts, powerful marketing tools,[2] the building blocks of both ivory towers and safe houses. In the Book of Judges, where the word shibboleth finds its origins, it is the byword that marks out who will live and who will die.[3] For queer online communities, shibboleths serve multiple functions simultaneously, defining niche spaces, regulating access to these spaces, and providing a shorthand for the discussion of complex concepts.

Queer communities have long relied on opaque signalling to gather their members, to define boundaries, to foster familiarity, and to invoke institutional knowledge.[4] Queers are not alone in relying on coded language to build connections between closets: friends of Dorothy and Bill W. alike have learned to recognize themselves in the utterances of a stranger, and many at-risk communities have built strategies for recognizing allies by their word choice. Jargon is used in self-policed spaces to signify loyalty, membership, and both the depths and boundaries of knowledge. Its opacity signals cultural kinship between those who have won access to these spaces while alienating those who have not. In queer subcultures, these shibboleths take many forms, from the language of ball culture (tea, shade, sickening), to hanky codes, to the information-dense acronyms of online dating (MTF, W4W, PNP, no fems, etc.).

An archive of soc.motss still exists on the Google Groups platform.

A brief history of the queer internet

Technology writer David Auerbach points to the 1983 creation of the Usenet group soc.motss—a supportive discussion group focused on “health problems, parenting, relationships, clearances, job security” and other holistic concerns—as the birth of the queer internet.[5] This was the first of many siloed queer spaces online: it had established boundaries and a clear purpose, and it was moderated.

With the arrival of the World Wide Web in 1990 came a radical shift in the way users interacted with the internet. Newsgroups gave way to websites, which meant discourse gave way to a more one-sided transfer of information, from the few who published sites to the many who read them. Early queer websites included Gay.com (1994), lesbian.org (1995), and PlanetOut.com (1996); today the landscape is much more varied, including web-only ventures and print publications that also offer online content. 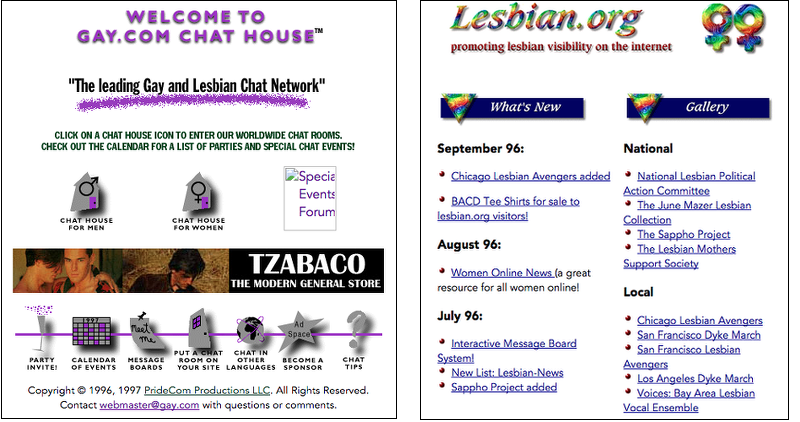 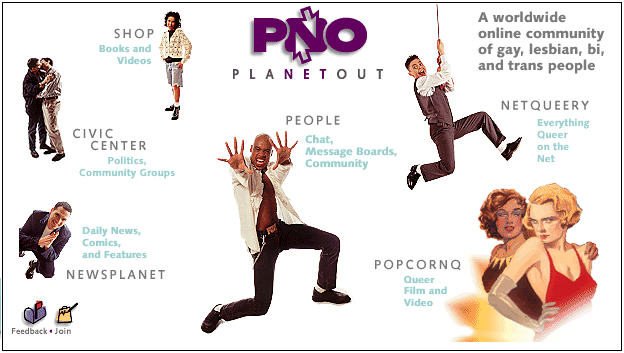 Niche websites differ greatly in purpose and function from the newsgroups of the 1980s,[6] but the two have clear borders and content moderation in common. A siloed space is easily comprehended and easily defended, and no special strategies are needed to communicate membership when membership is conferred by moderators. But the more recent development of the social web has led to porous borders. Livejournal arrived in 1999, followed much later by Twitter (2006), Tumblr (2007), and other platforms for user-generated content.[7] The hashtag-based web was a huge boon to niche communities, democratizing content production, improving discoverability, and returning to the internet’s roots in two-way discourse. At the same time, it presented new challenges for defending the boundaries of niche spaces developed by and for oppressed communities.

The functions of a shibboleth

Beyond signalling membership to communities outside the mainstream, shibboleths are shorthand for the knowledge and mythology contained in the vast cultural canon accumulated by online and offline queer communities. These systems of knowledge, once preserved in oral histories and short-run publications in isolated pockets throughout the world, now exist as an accessible discourse or grouping of parallel discourses online; as a result, they benefit from the same advances in discoverability and fluidity that are rebuilding the entire media landscape of the twenty-first century.

Queer communities are not unique in using shibboleths as shorthand for canon. The most obvious analogue is academic communities, but the corporate world produces the same effect: people working in highly specialized fields can refer in brief to bodies of knowledge by using highly specialized language, and at the same time they establish their own credibility and enforce the border between initiates and outsiders.[8] However, in queer communities the stakes are higher when it comes to established knowledge than in the corporate or academic worlds, since allyship often requires great sensitivity and a depth of understanding. Shibboleths act as shorthand for notions of trauma, consent, intersectionality, and other nuanced concepts that are crucial to competent and effective allyship beyond shared identity.

Because queer shibboleths work simultaneously to signal borders, membership, and systems of knowledge, using queer jargon to describe a protected space, in effect, creates one. Invoking safer spaces,[9] trigger warnings, enthusiastic consent, and other jargon implies an understanding of the concepts these terms represent, indicating a knowledge of potential dangers and the intent to proactively avoid these dangers; these terms undergo rapid evolution, reflecting the rapid evolution of the concepts they represent while also adding a layer of encryption to the defenses of queer spaces. As such, these terms create, authenticate, and defend the very spaces they describe.

Newly porous, queer online spaces—free from moderation, fostering peer-to-peer information transmission, coexisting with mainstream cultures—resemble queer offline spaces, but with two crucial differences. First, without geographical limitations, online communities can transmit information much more rapidly and across much greater distances than offline communities. Second, online discourse is preserved as text, accumulating a canon of history, scholarship, strategy, and other valuable literature that community members can build upon more easily than the ephemeral discourse of the offline world.

[6] Such differences are beyond the scope of this essay, but the shift from communal discourse to a more traditional publishing model—and the effects of gatekeeping, the issues of privilege and access, and the subscription to aesthetics of credibility and authority that came with this shift—is worth considering in a queer history of the internet.

[7] This is an abbreviated history of social media. A more nuanced look would include the many blogging platforms that sprang up after Livejournal but before microblogging, in the form of Twitter and Tumblr, exploded the landscape and harnessed hashtags for improved discoverability. In my view, these latter two sites represent a radical change—even Livejournal, with its early dashboard-based browsing system, used themed groups to sort content and allowed moderation; other blogging sites were geared toward standalone personal sites. Twitter and Tumblr allow users to aggregate content not only by author but also by topic, and any user can contribute to any tag with almost no moderation.

[8] See Nicholas Kristof, “Professors, We Need You!” New York Times, February 15, 2014, http://www.nytimes.com/2014/02/16/opinion/sunday/kristof-professors-we-need-you.html, and a rebuttal by Joshua Rothman, “Why Is Academic Writing So Academic?” New Yorker, February 20, 2014, http://www.newyorker.com/books/page-turner/why-is-academic-writing-so-academic, for some discussion of the inaccessibility and utility of academic prose.

[9] For some examples of Tumblr discourse on the topic, see Anonymous Refused, “For Your Safety and Security,” http://anonymousrefused.tumblr.com/post/99047385737/for-your-safety-and-security (“The term ‘safer spaces’ is increasingly used as a short-hand for a loosely interconnected set of concepts and practices developed to challenge oppressive power dynamics within radical collectives”); Silent Barn Safer Spaces Working Group, “Silent Barn Safer Spaces Policy”, http://saferbarn.tumblr.com/post/86469904392/silent-barn-safer-spaces-policy (“We feel it is important to directly confront social hierarchies and oppression as they manifest within our space”); or any posts in the safer spaces tag, https://www.tumblr.com/search/safer+spaces.

Kathleen Fraser is an editor and book designer working in Canadian small-press publishing. She earned her master’s in publishing at Simon Fraser University, where she studied the ways free/open-source technology can empower independent publishers. She is interested in the interactions between language, power, and accessibility in publications serving queer audiences. She lives in Montreal.