On the Web, Gendered Space is Gendered

By Jennifer Chan No: 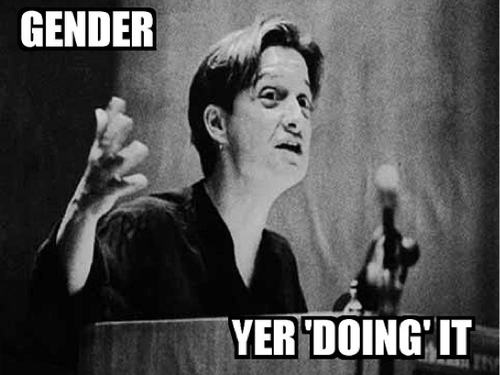 A core tenet of contemporary feminism is to question the definitions of masculinity and femininity when the Internet has become a convergent space for work and socialization. For Internet artists, it is both a medium and an environment. For researchers, it is an informal discursive space where accelerated streams of content inspire a need to examine the patterns and politics of our exchanges online. This issue showcases work by ten artists and writers who question existing regimes of gendered representation in online and offline environments.

Even in conditions of apparent anonymity, online environments such as Reddit are as gendered as the physical world in its advertising and rhetoric. In “Hey Girl, Who Needs Feminism? Feminism as a Meme”, Milica Trakilovic discusses feminist reactions to online misogyny within Internet memes. Despite our disembodied engagement with the space of the web, choosing to appear  “male” or “female” on a social networking profile engenders expectations of gendered behavior. Angela Washko’s Playing A Girl reveals user identification with female characters through transcription of an in-game chat with a World of Warcraft user.

Net artists and users deliberate gender in immanent ways by dint of appearing online as themselves. The selfie, the status update, the post – these are scenes of exposure and visibility that constitute an always-becoming self on the Internet. Georges Jacotey’s performance, Son of A Patriarch, explores queer desire and revolt towards orthodox masculinity online and in pop culture. Sarah Gram’s “The Young-Girl and the Selfie” analyzes the economy of social attention around the invisible labour of young women’s photographs of themselves. Finally, Rozsa Farkas’ “Exhibitionism or Perhaps Rejection” looks beyond the obvious carnal dimension of performance to investigate the performative vulnerability of status updates by net artists. Here, unfettered self-expression contribute to a larger "web presence" that engages networks of individuals who follow each other based on ideological and aesthetic interests.

Kate Durbin’s ongoing Tumblr project, Women as Objects, reblogs images that teenage girls have posted of themselves and of femininity in an unregulated manner. Resulting in an aggregate of vulgar, sweet (and other times self-sexualizing) hyperfemininity, the project captures the fragmented, questionable visual interests of teen girls who contend with popular femininities through image collection–while inadvertently reproducing the art-world-fetishized “teen girl aesthetic”. Inspired by Durbin’s logic of indiscriminate sharing of users’ perspectives, I curated  “Crazy, Sexy, Cool”, an online exhibition of gifs gathered from 25 international artists and curators who responded to this issue’s theme of “gender(ed) cultures on the Internet”.

As social networks increasingly encourage user activity to be consolidated onto  individual profiles, surveillance of digital subjects become harrowing in light of privacy for marginal sexual orientations. Natália Perez and Jon Oster’s “Coercion by Data: Six Thoughts on Gender, Sexuality, and Resistance in the Online Panopticon” is a stark reminder of historical attempts from different governments to monitor and police queer-identified individuals. While some digital creatives have responded by creating their own networks, others navigate within existing control structures. The Trans World Order Affinity Group did both. In “Feminist, Queer and Trans Online and Offline Praxis”, Sophie Toupin documents the intentions behind the queer collective’s operation of an ad-hoc tech hub for connecting protesters during Occupy Wall Street–whilst remaining out of sight to escape discriminatory surveillance in a heteronormative world.

In this issue, I foregrounded remix, media aggregation and networked performance as critical web-based practices that research the non-verbal displays and discussions of gender on the Internet. These were included as an acknowledgement of a plurality of feminisms occurring online and offline–some in a self-declared manner, and others that don’t fit into the prototypical categories of “feminist”. In doing so, I hope to reveal some of the confused and divergent perceptions of gender and sexuality online as they are now.

Jennifer Chan is an artist and researcher who makes kitschy remix videos as a form of social commentary on art and gender after the Internet. She has had solo screenings include the Nightingale Cinema (Chicago), Videofag (Toronto), and Marshall McLuhan Salon in the Embassy of Canada in Berlin for Transmediale 2013. Her curatorial projects have appeared at Conversations At The Edge, XPACE, Trinity Square Video, VTape, and InterAccess Electronic Media Arts Center. Chan’s writing on the histories and trends of Internet art have been published on West Space Journal, Rhizome, Networked_Performance, Art F City, Pool, and Junk Jet. She grew up in Hong Kong and currently works between Toronto and Chicago, where she teaches media arts practices at School of Art Institute Chicago.