New - Media - Age : An Interview with RECAA Members About Aging and Empowerment Through Digital Media

By Katja Melzer No: 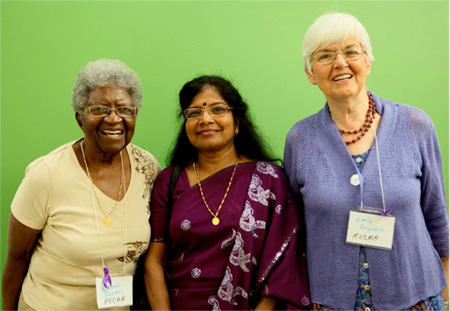 Katja: Why do we meet here at the James Lyng High School in St-Henri?

Madhu: We hold our weekly meetings here. Two years ago when we were looking for a new place to gather, Alannah Murphy of the Community Learning Center (CLC), which is attached to the high school, invited us to use this space. One of the advantages of being here is that the CLC is a meeting place for a lot of community organizations. So it is a very useful and productive environment. Here we are connecting with the students in a spirit of intergenerational exchange. We have already worked with them, showed them our theatre workshops and received very good feedback. We also launched the ageism project, the goal of which is to show the different attitudes towards aging.

Sadeqa: The idea of our ageism project “The Golden Feedback Loop” is to bring together different generations, in order to discuss how the younger generation views people who are aging. Our experience with them has made us welcome and known by many in the school.

Louise: I think we also gave the school a boost. The English School Board of Montreal had been threatening to close the school down. RECAA coming in and doing its work has been one of the incentives to keep it going. 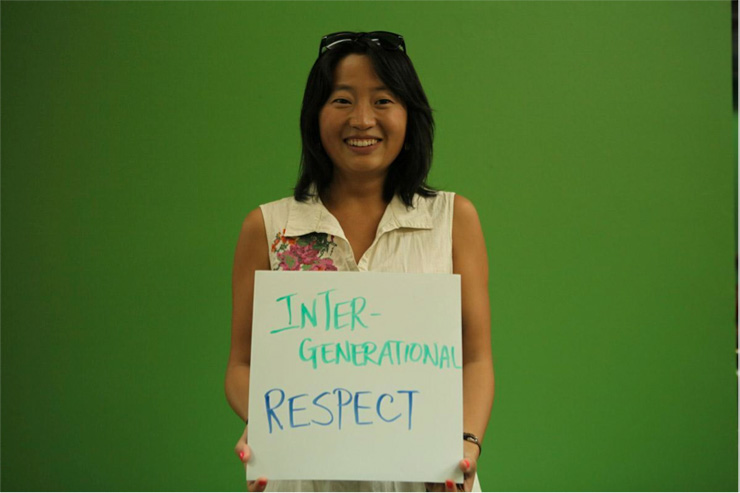 Katja: Where did the initiative to found RECAA come from?

Ethel: Twelve years ago Anne and I met at the end of a project sponsored by the CLSC Rene-Cassin which had the objective to build bridges between the cultural communities and public institutions (e.g. CLSCs, hospitals, police, firemen). I was at that time on the executive board of the Council for Black Aging Montreal Inc., one of the organizations involved in the project.

Anne: Besides Ethel from the Council for Black Aging, we were joined by participants from The Chinese Family Services, SAWCC: The South Asian Women’s Community Centre and COPSI: Centre orientation paralegal et socio pour les immigrants. We decided to keep meeting beyond the completion of the project and to look at the issue from the cultural communities’ point of view.

Sadeqa: In these first meetings we developed the idea of creating an organization composed of elderly people from cultural communities. At this time I was a coordinator at the SAWCC, which actually supported RECAA’s first application for funding as a project. After 3 years RECAA‘s members decided to create their own non-profit organization.

Emily: One very important point is the “why”. There was a need to form a group to work with seniors who had experienced elder abuse. Not so much that the group has had that experience, but we all know about it through our work with seniors. Because of language and dependencies within the family, and because of lack of “entourage” that might help, the ethnocultural community is more isolated. So the question was: how can we sensitize the population to that particular problem for ethnocultural communities?

Anne: It is important to emphasize that elder abuse is one of the most hidden forms of family abuse. Many elders feel ashamed to disclose that they are being mistreated by family members or a caregiver. When one factors in the challenges of language and culture, the sense of powerlessness can be profound. The founding members of RECAA wanted elders to speak to each other about this reality in a space that would allow for a constructive interchange. 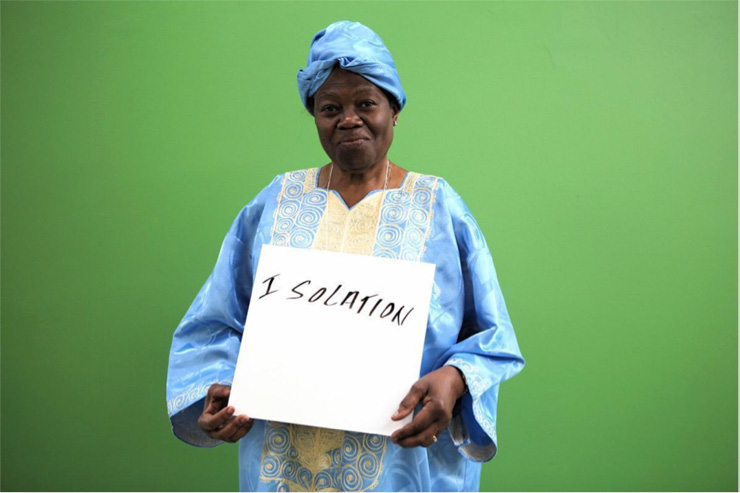 Katja: And what are your methods to raise awareness of elderly abuse?

Anne: Although we come from cultural communities, we do not all speak the languages of our communities. We decided to try a theatre workshop. This is known as Forum Theatre.

Nadia: RECAA members developed 5-minute nonverbal skits showing elderly people in difficulty. In Forum Theatre participants are invited to intervene on behalf of a person in difficulty--to take over the role of the person in trouble and propose an alternative action that can lead to a possible solution. The audience [members are] not just spectators; they become spec-Actors. The idea is to find different potential solutions together. There is no one solution.

Madhu: The interaction with the audience is one of the most important parts of it. It is a very lively and engaging, interactive process.

Katja: Can you say more about the relationship between RECAA and the ACM (Aging Communication Media) Network?[1]

Sophie: For about ten years RECAA was going into the communities and presenting their workshops about elder abuse. Then they wanted to move forward and we started the collaboration with the ACM and the Atwater Library Digital Project three years ago. RECAA members were interested in learning more about digital devices and media. They wanted to interview themselves and create an archive of their work. So they applied and received funding to buy a computer and a camera, and they started recording their workshops and their rehearsals. I taught them how to use a camera and now to film without my help. This year we are planning to do three interviews. Currently the members are testing the media and devices they would like to use, be it a phone, an audio recorder or a camera. For example Enid likes to work with an iPad while Louise prefers the iPod.

Katja: To what extent do digital media support your community work?

Ethel: Beside the theatre digital media allows us to show what we do and to emphasize the impact that we, as a small group of people, could have on a community.

Emily: As a senior you have the feeling that the world is passing you by because of cell phones, video cameras, and other devices. This collaboration gave us the opportunity to learn how these tools work and to use them. Together with Sophie [of Mobile Media Lab Concordia], we edited the films that we had taken here at the Atwater Library. At first, some of them were pretty rough, but when we all put it together and edited it, we came up with something that we thought was good and interesting. We presented those films at our annual meeting and at the World Elder Abuse Awareness Day 2013. Plus there are other parts of digital literacy, like setting up a webpage. And I guess it could go even further.

Madhu: Last year I made a trip to India and I was travelling in the train. I took my camcorder and I videotaped the women travelling with me. I asked them about their feelings towards aging so I could capture the perspective of Indian women on this issue. I believe that digital media give us an opportunity to expand, to get a view of the world, and to share our knowledge.

Kiren: Seeing how, for example, Wikipedia changed our understanding of knowledge, I think one has to understand these kinds of media to make a contribution and be part of it. It is important for elderly people to gain access to the digital world in order to participate in the creation and sharing of knowledge, expertise, and personal experiences.

Anne: I view digital technologies as an important addition to the mandate of RECAA. It is a way of reaching out to elders whom we cannot reach through our Forum workshops. It is also a way for RECAA to support and learn from others on a national and international level how to work towards a culture of respect.

Katja: What are the biggest challenges in your work?

Sadeqa: One big part is the funding, and the struggles that result from this situation. We are lucky to have volunteers who commit themselves to our weekly meetings. They are the active supporters that RECAA relies on for its creation of ongoing work.

Emily: Also reaching out to the communities can be difficult. This is partly due to language barriers. Some of the cultural communities work with the elderly only in their native language. Although we are prepared for that, and work with Forum Theatre where no words are spoken, it is still difficult to draw new people in. Maybe it is also because our communication within the group is mainly in English.

Madhu: I agree, we need to bring in some new members. The reality is that we are all getting older. That does not mean we have less enthusiasm, but our body sometimes just does not listen to us. The other challenge for us is to stay aware and up-to-date with the changing needs of seniors in our community, as well as throughout Canada and in the world--in terms of their health issues, their abuse issues or security issues.

Sadeqa: There are also diverse cultural values as barriers. In many cultural communities, seniors depend on their children. Their mobility is limited or they are not free to leave, even if they want to participate. Many seniors from immigrant communities are very much under the control of their children who want to protect their parents; they don’t want them to get hurt. Furthermore, seniors do not want their children to have a bad reputation by talking about the abuse that they are going through. I relate this to what occurred at the South Asian Women’s Community Centre. When we first started having a women’s association and dealing with one or two cases of abuse, we were soon labeled as “home breakers”.

Madhu: I think the biggest challenge our group has faced is to break the silence in all our communities, to continue to create safe places where people can open up and talk and find solutions to a problem that confronts too many.

Ethel: We want to let people know that there is help out there and that we will not infringe on their privacy or break their families. In this group, we respect the different ways of living and thinking. Working around that takes a lot of time and experience. For some people it takes one day, and for others, six months before they decide to join. But it works; we opened a lot of doors and made people hear us. We all learn together. It has been a very exciting experience. And it is fun!

[1] ACM is an interdisciplinary network of partners “that brings together researchers from Malaysia, Catalonia, Canada and Quebec, whose goal is to inquire into the intersections between communication, media, aging and the concept of mobilities in light of the demographic shift to an ‘aging society’ and the current discourse on active aging.” (Source: http://a-c-m.ca/)