FemHack - Feminism and Hacking Converge in a Montreal Tech Collective

By Christina Haralanova and Sophie Toupin No: 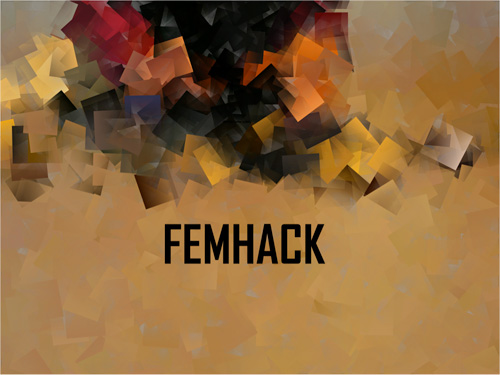 Feminist HackerSpaces Around the World

The rapid spread of hackerspaces in Europe and North America in the past decade has opened new possibilities for technologically apt and curious individuals to practice and experiment with technology in informal and unconventional ways. Regardless of their location and despite commonly approved principles of openness, hackerspaces in general have a hard time attracting and retaining individuals such as women, people of colour, and gender non-conformists - in other words, individuals representing minorities in the field of technologies today.

Even if there are fewer women than men invested in technology and hacking in general, there are those who have joined the numerous hackerspaces and geek communities around the world. They have created venues for feminists to practice learning technology on their own terms, rather than in competitive ways offered by their cis-male peers. Their obvious interests coincide with those of cis-men in the field: to hack the gadgets and machinery around them, and use their skills to repair, repurpose and adapt items to their personal needs. A movement of non-mainstream hackers, makers and geeks has started, in particular those with interests in feminist activism and social justice, aiming to rethink the concept of openness at the core of the hackerspace project and adapt it to their gender and intersectional[1] struggles.

Feminist hackerspaces[2] attempt to counter experiences of patriarchy and other forms of oppression including sexual harassment and humiliation, as well as racism or micro-aggressions against minorities. They are also founded in an attempt to create spaces where feminist hackers, makers and geeks set the boundaries of their own space from the outset, enabling the development of a new culture that is more attuned to feminist and intersectional principles based on acknowledging and challenging privileges, creating safe spaces for learning and sharing, putting together collective women’s rights projects, etc.[3]

This new trend in hackerspace development is the result of a multitude of factors. First, feminist hackers, makers and geeks have questioned their identification with the predominantly white cis-male heterosexual hacker culture for a few years now. Such questioning has led many to prefer being associated with terms such as “makers”, “crafters”, “geeks” or “tinkerers” rather than “hackers”. As a case in point, their narrative is more focused on talking about “community workshops” rather than “hackerspaces”, a concept which seems less elitist and might be more accessible to newcomers and members of their communities. Second, they challenge the hackerspace mantra of openness in setting up boundaries and making their feminist principles explicit: moving from “open” to “safe” space. Third, in a desire to manifest a culture that is deeply rooted in both feminist activism and hacker practices, feminist hackerspaces are more political than traditional hacker communities.

In 2011, a feminist group started forming around Foulab - the first Montreal hackerspace.[4] Initially called FouFem,[5] this subgroup gathered feminists, women and queers interested in hacking and hacker culture, but hesitant to associate themselves with the dominant hackerspace culture. After a series of meetings, the first members of FouFem realized that many of their preferences for gathering, learning and sharing were not fulfilled by Foulab. These included a desire for a more social justice-oriented space, decent toilets, a tidy and well-organized space for hacking, a kitchen for food hacking, and a safe environment for bringing members’ children to hands-on activities and workshops. In addition, a number of female workshop participants complained that the introductory courses provided by FouLab were too advanced for their knowledge level and they did not feel comfortable asking questions for fear of intimidation and criticism in a group of seemingly more experienced and predominantly young male participants.

In November 2012, as part of The HTMlles Art-Tech Festival produced by Studio XX, FouFem organized a full-day hackathon of “women-only”[6] do-it-yourself (DIY) activities, including presentations, hardware and software skills sharing sessions, and a closing discussion on the pertinence of holding “women-only” workshops (which was open to participants and a larger public of sympathisers). The feminist hackathon was initially planned to be held at Foulab, however, certain hackerspace members opposed the idea of “restricting” the event to “women-only” participants – with a risk of disrespecting the principles of openness of the hackerspace.

With more than fifty participants at the FouFem hackathon, the event proved to be not only successful, but also highly appreciated, and most participants expressed their interest in follow-up events and gatherings. Many commented positively on the “women-only” aspect, of learning in a safe space environment where they pushed the boundaries of their own technical knowledge and explored new hacking skills. With such interest for a hacking space, based on feminist principles, FouFem continued gathering in Montreal, this time under a new name: FemHack.

Dissociated from Foulab, FemHack is formed as an autonomous group of feminist hackers, makers, and geeks. Its mission is to create an empowering and inspiring environment for politicised feminist hackers. Triggered by DIY practices, learning by doing and curiosity about how things are made, believing in freedom of technology, privacy, openness and sharing of common goods, FemHack identifies with the best elements of hacker ethics. Its motto is: (Let's) Do-It-Together.

FemHack’s future and direction will depend on the participants and their volunteer forces. For now, there is a discussion list and “open” meetings for interested participants to join in. Workshops will soon be announced on a blog dedicated to the project. However, as an informal and mobile initiative, FemHack has a problem of finding an appropriate and permanent space for meetings. The participants meet mostly in cafes and at members’ houses where there are facilities to hack, cook together, and take care of the members’ children. At FemHack bi-weekly meetings, the members discuss the directions of this new project:

In “The Rise of Feminist Hackerspaces and How to Make Your Own,” Liz Henry explains how the feminist hackerspace she helped found quickly got off the ground because everyone involved was serious about committing time, energy and money to start a new space. FemHack is struggling with finding such inspiring commitment because of a variety of issues ranging from members’ economic situations to members’ busy schedules. Reaching a common vision between its core members is also an issue. Some really want to hack, while others prioritize building a ground for feminist politics and documenting the process. This difference in interests should be seen as a strength rather than a weakness, but it nevertheless is causing frustration among the few members. FemHack’s focus on finding a permanent space will allow us to organize regular hacking activities around the space, talk about hacker politics, as well as hold regular members’ meetings. But for that, we need committed tech feminists that are ready to put time, ideas and resources into this collective project, to foster a movement of feminist hackerspaces.

The material manifestation of feminist hacker, maker and geek culture via the creation of feminist hackerspaces shows an emerging trend: the synthesis of a feminist and hacker movement. Rising in part from feminist geek culture in the online realm (IRC meetups, Geek Feminism Blog and Wiki, as well as groups such as PyLadies or LinuxChix, GirlGeekDinners), feminist hackerspaces have gained rapid traction in the material world, concentrating their efforts on creating better conditions for feminists to evolve in and with tech/hacker communities. Feminist hackers embody a political outlook on hacker culture in that they (re)politicise the somewhat neutral inclusive stance that has become more visible in the past years. Instead of simply encouraging more women to participate, they are foregrounding a clear set of feminist principles.

Finally, the issue on who is welcome in feminist hackerspaces is ambiguous. While Double Union restricts its membership to “women-only” (queer and significantly self-identified women), Flux and Seattle Attic are open to all genders provided they embrace intersectional feminist principles. This issue of who is welcome to be a part of FemHack is also a challenging one. So far, its core group is “women-only”, but its co-founders are still struggling with such position. Irrespective of their decision, the issue seems to be less about agreeing on who is the subject of feminism (though this is important!) for feminist hackerspaces in general and what feminist hackers are gathering to do, but rather how to create spaces where boundaries are set by the members for them to feel empowered to hack and tinker with technology.

[1] Kimberlé Crenshaw coined the term intersectionality in 1989 in a seminal article entitled Demarginalizing the Intersection of Race and Sex where she highlighted the ways in which race and gender interact in the life of black women’s employment experiences. The term “intersectional feminism” has gained a lot of traction among activists circles leading many to gather around the slogan: My Feminism will be Intersectional or it will be bullshit!.

[2] Interested in creating your own feminist hackerspace? Check out the Feminist Hackerspace Design Pattern.

[4] To learn more about Foulab and hackerspaces in general, check the .dpi 21 article Foulab Montreal HackerSpace – A Place to Meet, Learn and Do-It-Yourself

[5] The name is a mixture of English and French, taken ‘Fou’ from Foulab and ‘Fem’ from femmes = fr. woman/women.

[6] We understand a women-only audience as including women, queer and transgendered people of different origins and backgrounds.