Anxious Landscapes: Burtynsky's Photographs and the Possibility for a Feminist Risk Politics

Edward Burtynsky's photographs investigate human interventions on the landscape, including mines, oil refineries, shipbreaking, large scale manufacturing, and more recently water. Many critics of Burtynsky's work suggest that his photographs are both ambivalent and politically ambiguous because they aestheticize ecological destruction. Joost van Loon suggests that risk society can produce a politics of urgency, a sense that immediate action is needed to get ahead of the tidal wave of ecological problems. When faced by this looming apocalyptic possibility, however, the urgency becomes unsustainable and routinely degrades into a vacillation between apathy, anxiety and ambivalence: affect that can be read in Burtynsky's photographs. But his works must also be located in the tradition of landscape photography, which as many feminist critics have noted is connected to a patriarchal politics of mastery over the land that works to exclude human labour and women from the landscape. To simply dismiss these images for this reason is also to miss the complex and powerful response Burtynsky's photographs elicity in viewers. What can a feminist politics of risk culture bring to a reading of Burtynsky's work? Is a feminist politics of risk possible? 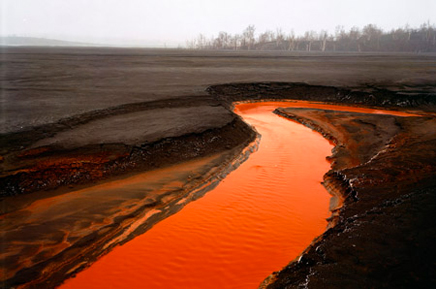 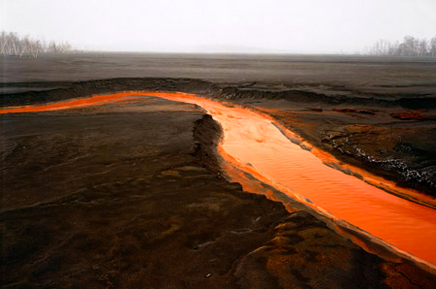 Nickel Tailings No. 34 and No. 35
Sudbury, Ontario 1996
Edward Burtynsky
www.edwardburtynsky.com

Burtynsky's photos draw the viewer in with their stunning landscapes, and often the viewer needs to spend a moment deciphering the image. This moment of vacillation in the viewing process is discussed by many observers of Burtynsky's work (see Reese; Bordo) As Paul Roth says of Burtynsky's technique: [it] consistently provokes a crisis of vision... [that] attracts and repels the eye (168). Perhaps best known are the photos Nickel Tailings #34 and #35 that show us vibrant orange streams across a blackened landscape. These photos of aestheticized mine waste are alarming, showing us fiery rivers that have devastated the surrounding area, turning it into a blackened wasteland. It is that moment of conflict or confusion that the viewer might experience trying to reconcile the beauty with the devastation that gives the photos their impact. His photos provoke contrary impulses and refuse conclusive judgment: they are neither celebrations nor indictments of these polluting industries.

Because of this dynamic, many critics of Burtynsky's work argue that his photographs are ambivalent and politically ambiguous because they aestheticize ecological destruction. In his review of the book of collected photographs Manufactured Landscapes , Jonathan Bordo describes his viewing process:

The spectator is thrust into an ambiguous situation of pondering pictures of ecological devastation while beholding dazzling visual surfaces. (Bordo 91)

For Gerda Cammaer, the representation of ecological disaster in high art can only be described as taking a neutral stance, eclipsing the destructive dimension of the represented activities (Cammaer 123). As art object, the oscillation swings heavily towards beauty or awe without contextualizing questions of ethics or the awful (Cammear 121). Ultimately, I am inclined to agree with Kenneth Baker who says: Burtynsky's refusal to stand fast in any of these positions explains the improbable emotional authority of his work (Baker 40). The viewer is thrust into a position in which he or she is both complicit in and disturbed by environmental destruction.

The ambivalence and ambiguity that so many critics identify can be related to the larger affective dynamics of risk society. In particular, the vacillation that so many viewers experience in viewing aestheticized ecological destruction mirror the contradictory and cascading impulses of apathy, anxiety, and ambivalance that mark a politics of urgency: “this is disturbing,” “what can we do?”, “who cares?”, and then back again. Van Loon suggests that anxiety often produces risk avoidance, so that anxiety can produce a withdrawal from risk (van Loon 5). On the other hand, apathy can be understood as a tactic of risk aversion, a turning away from or dislike of risk (van Loon 5). With their almost clinical detachment, the photographs seem to evoke an affective response to risk, without necessarily provoking risk aversion or containment strategies. For this reason they demand a feminist reading; one that considers their complexity and power, without ignoring the ways in which they tap into both dominant hegemonic power structures, and culturally informed affective responses. As Ursula Heise points out, representations of toxicity and risk are grounded in longer term cultural narratives. And Gillian Rose reminds us that landscapes are representations of the interactions between human society and nature (Rose 86). In particular, landscapes represent ways of seeing that can be connected to an “aesthetic masculinity,” or a visual ideology which establishes patriarchal mastery over the land, its peoples, and its creatures (Rose 101 and 112). 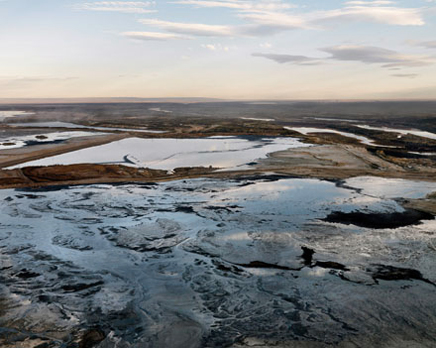 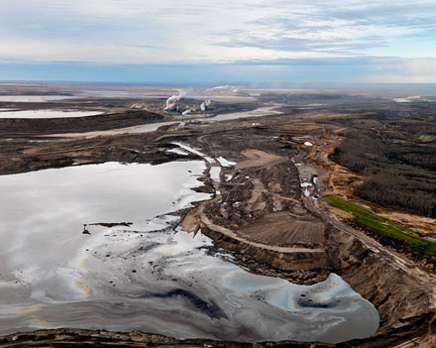 Alberta Oil Sands #7 and 9 are landscapes in muted colours, with the sky and clouds reflected in pools of water (are these lakes? tailings ponds? oil?). Roads are barely visible, smokestacks dwarfed by the open expanse of land, but with huge tracks of it laid bare and exposed. With their quiet beauty, these are difficult photographs. Without the captions, deciphering their content would be difficult for anyone outside of the industry or not familiar with the area. And yet the captions simply label, giving no hint of the politically contentious nature of the project both within Canada and internationally. (They were also taken and labelled well before the oil sands became such a huge and heated public debate in Canada). Oil Fields #28 , taken in Cold Lake, Alberta has a shiny silver pipeline in the foreground, offset by the brilliant green of the grass underneath it. Behind it is the darker green of the forest. The colours and composition are beautiful. But as many critics have noted, what is striking about these photographs, as with much of Burtynsky's oeuvre, is the absence of the body: no oil sands labourers from across Canada, capitalizing on the extraction industry; no citizens of Fort Chipewyan burdened with higher than average cancer rates from downstream pollution out of the oil sands; and indeed no animals, certainly none of the hundreds of wolves culled to protect the Woodland caribou stocks that have been decimated by oil sands activity. Risk politics offer an interpretation whereby the planet is at risk, but in Burtynsky's photographs no bodies are at risk; there is no apparent entry point for a feminist politics or for a politics of environmental justice. There is a fundamental displacement of risk from people to the land, or from here to there. It is a relationship defined by ownership or mastery, wherein the risk is mapped onto that which is owned or mastered. 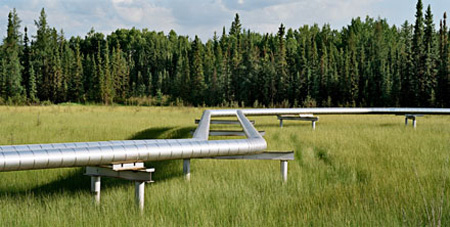 Burtynsky's images enact a viewing position of mastery over the landscape, but also comment on that very dynamic. His work invites a critique of complicity and not a change in that fundamentally masculinist relationship. With their strangely ambiguous emotional authority, Burtynsky's photographs eschew an easy feminist reading that would reject them outright because of their distancing gods-eye view of largely unoccupied landscapes, absent of people, or any bodies at all. Ursula Heise offers the most cogent intervention on the risk society thesis for feminist critics, and one that is aligned with the goals of the environmental justice movement. She notes that whereas the risk society thesis understands ecological devastation as a result of the breakdown or decline of capitalism, the environmental justice movement situates environmental destruction in the vast inequalities created by global capitalism (Heise 149). It is here, in the nuanced understandings of power –its effects and affects on human, non-human, and more-than-human bodies – that a feminist risk politics must be built. To some extent, anxiety and affect have traditionally been relegated to the feminine, and thus feminist, domain; to what extent can we understand this anxiety –provoked by Burtynsky's work and part of risk society – as a result of the erasure of bodies? I'm not sure that Burtynsky's photographs can be recuperated for a feminist politics, but, I do think that, by their very exclusions, they provide a unique vantage point through which to ponder the possibilities for a feminist politics of risk. The feminist risk politics that I am advocating puts all bodies back at stake, including humans, non-humans, and more-than-humans, and understands the interconnectivity of all living thing; the environment at risk is, after all, always already bod(ies) at risk. A feminist politics of risk is one that is aligned with the goals of the environmental justice movement and provides nuanced critiques of how risk society not only creates unequal relations of risk related to ecological devastation, but also produces cultures of risk, which often manifest as affective responses to risk including risk aversion and risk containment.

Sabine LeBel is PhD candidate, artist, and environmentalist who lives in Toronto. Currently enrolled in the Communication and Culture Program at York University, her PhD research does a life cycle analysis of the personal computer. Her research has been published in academic journals including Canadian Women's Studies, Cineaction, and Communications +1 . She works as a writing instructor at the University of Toronto and teaches a course on environmental communication in the Environmental Studies Department at Trent University. Sabine can watch an abnormal amount of reality television and often lays awake at night worrying about e-waste.