The turcot interchange : community encounters with a queer sublime

Seeing the Turcot Interchange with love and a found locket, Danielle Lewis, 2009.

The Turcot Yards, located in southwest Montréal's Saint Henri neighbourhood and known lovingly by myself and many other residents as "the wasteland," is popularly understood to be one of the largest abandoned spaces in North America. 1 It is also a highly contested area that, far from empty and unused, has played an active role for a diversity of communities over time.   In light of the Quebec Ministry of Transport's ongoing plans to redevelop the Turcot Interchange, the point at which crumbling, concrete expressway systems overlap above the site, I want to express the importance of the existing interchange as a raised, monumental structure. Drawing from interviews with friends and neighbors concerning the site's uses and meanings, I propose to replace the framing of the yards as an "abandoned" site with an understanding of the ambivalent, queer "abandon" to the architectural object of the interchange and its place in a broader landscape.

The Turcot Interchange is frequently experienced as a non-event, a means of getting from one place to another. For Montréal residents outside of Saint Henri, it is the void between home and work; for tourists, it is the threshold to the parts of the city that are created and cleansed specifically for their consumption. 2  While the interchange was designed and built for the activity that happens high above the Turcot Yards, local residents focus on the activity below which, in one neighbour's words, "just gets passed by." What emerges from underneath the prevalent vision of the interchange is the space unplanned for, an interstice occupied by a queer community. 3  For communities with little formal spaces of their own, and for those who actively resist the programming of formal spaces, interstitial sites such as the Turcot Yards are crucial to shaping non-normative modes of subjectivity , sociability and desire. 4 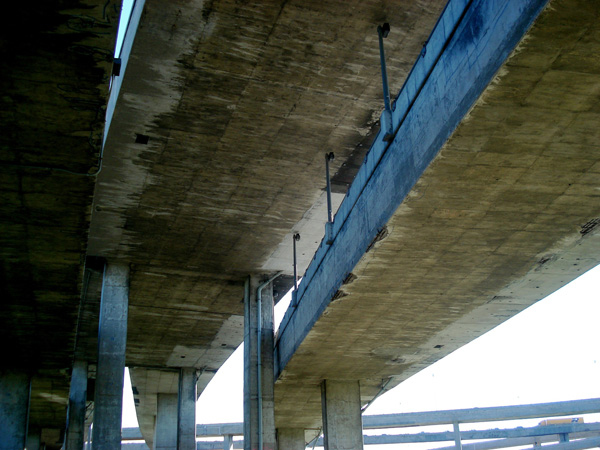 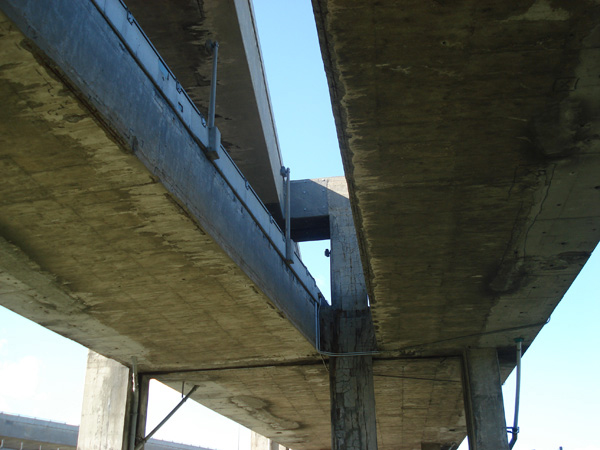 Views of the Turcot Interchange from the yards, 2008.

While the Turcot Yards are perceived and used in many ways like a public park, as a place where people go for walks and to take in scenery that diverges from the city streets, the lack of overt programming and design make a considerable difference. Despite the fact that any occupation of the site is illegal and would be considered trespassing, the yards are regularly inhabited by artists, urban explorers, the homeless and, most frequently, residents from the neighbourhood. Interviews with neighbours illustrate that local uses of the area are immensely varied, and include drinking morning tea, playing with children, having bonfires, building museums in the sewer , making music, staging photo shoots, setting off fireworks and having sex . In the yards I have dressed up with friends in drag, marked the columns in hot pink paint, fallen asleep on abandoned couches, made movies, gone on dates, hidden from the police and gotten lost. It is a space that facilitates imaginative uses precisely because its current purpose is ambiguous, and because its lack of design refuses to choreograph any one particular mode of occupation. It is a place in which both the capitalist logic of property and sex/gender systems can be undermined by the absence of any dominant program. 5

The ambiguity of the Turcot Yards gestures towards the sublime, in particular a s a site that, from the ground level, seems impossible to grasp with an analytical distance, to accurately represent visually or verbally . One neighbour describes the area in an interview as both immensely beautiful and monstrous, emphasizing that no map of the yards could encompass the visceral experience of its territory. Looking out from under the interchange, one is confronted with an unusually vast area of open space, lined in the distance by long, unmarked buildings. In the winter, snow collected from other parts of the city is heaped into tall, artificial mountains and, as these slowly melt, lost or discarded objects from the city's streets and sidewalks are released, leaving clues to an unsolvable mystery. Small lakes are lined at their shores by scraps of paper, rusty parts of tools, snatches of fur lining, and single gloves. In the warmer months, these odd assortments are found amongst the area's natural growth, including unruly grass, bright goldenrod, and medicinal herbs such as mullein and echinacea. Towards its edges, the space is beset with unexpected hills, broken down piles of rock, confusing signage and the occasional fox, and is bordered by the dense forest of the Saint Jacques cliff. It is from this complex setting that the monumental interchange emerges , overarching the landscape. 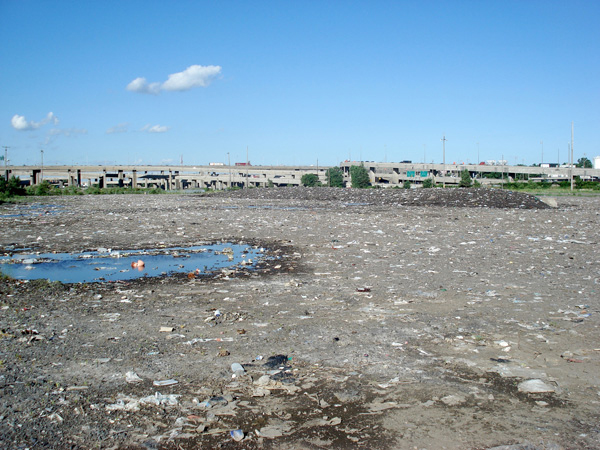 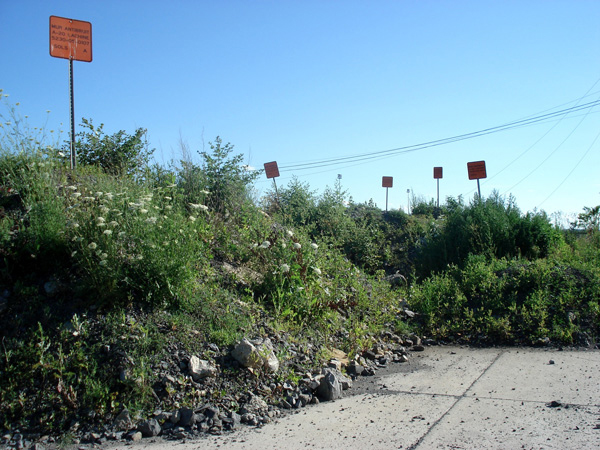 The Turcot yards after the snow melts and the ambiguous signage on unexpected hills, 2008.

There is a disruption of one's physical and sensual stability in the Turcot Yards , a product of the collage-like formlessness and chaotic nature of the spaces literally leftover from major planning projects. 6 As one Saint Henri resident articulates, the interchange creates an affect within the yards that is both terrifying and oddly "comforting and homey." She focuses on an experience of sitting inside one of the windows that are set into the concrete train tunnel beneath the interchange. From this position, she felt threatened by the territory on either side of the window—the oncoming trains, the massive columns of the interchange, and the possibility of police lurking in unseen areas—but she also felt as if she were a part of the structure itself, as if they had somehow merged.

This experience of suspended subjecthood recalls Barbara Freeman's feminist re-reading of the sublime, which proposes the possibility that the subject can experience an intensified merger with both architectural object and the surrounding landscape. 7 While the Kantian schema of the sublime demands that the chaos of materiality is quickly mastered by a subject's rationality, alternative models propose a sublime experience in which the subject no longer needs to dominate the landscape. 8  Rebecca Duclos posits a feminist sublime that moves from a momentary confluence of self and space to a calculated inattention to object as landscape. 9 This type of sublime encounter entails a particular type of abandon , a deliberate disregard for the object at hand.

Duclos' digressive mode of the feminist sublime fits with descriptions of the local queer community's relationship to the interchange. While residents come face to face with the interchange every day, the type of vision most commonly directed to it could be better described as dedifferentiated or indirect. 10 Interviews are marked by a fluctuating presence of the interchange, both in the dialogue itself and in neighbours' own experiences of the yards. For instance, one friend describes the strange way in which the interchange seems at times to be monumental and invasive, and at others to fade or blend into the background. Bypassing the drive to territorialize, a queer relationship to the yards is a mode of occupation that allows for and embraces this vacillation, through which the interchange remains a desired, if monstrous, other. As such, the object of rapture in the sublime experience of the Turcot Yards does not necessarily present us with a struggle for mastery, a need to contain the site's excess. 11

The sublime elements of the Turcot Yards provide a space of both convergence and difference, a place that is crucial for the maintenance of queer communality. Insisting that queerness is not just constituted in the body of the queer (in one's inhabitation, gaze or signage) but is a lived spatial process, Christopher Reed proposes that queer space be understood through the term imminent , meaning to loom over or threaten, "ready to take place." 12 He writes that " queer space is space in the process of, literally, taking place, of claiming territory." 13 As feminist critiques of the sublime move away from the need to master the landscape, the idea of queer space as imminent similarly opens up the possibility that the process or threat of spatial production can take precedence over the desire to claim or own space. Imminence, in this sense, could imply a balancing of the two sides of the sublime experience, convergence and difference. 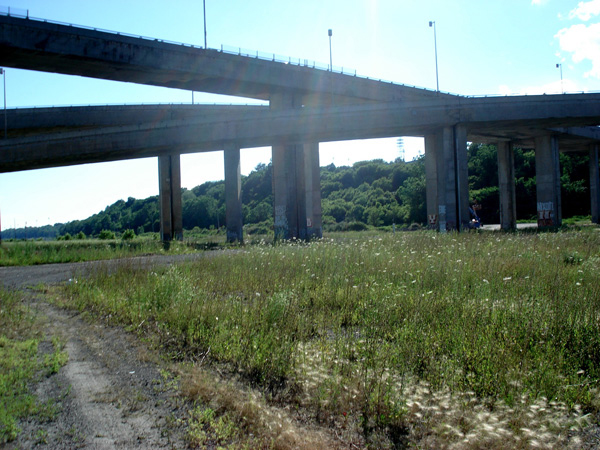 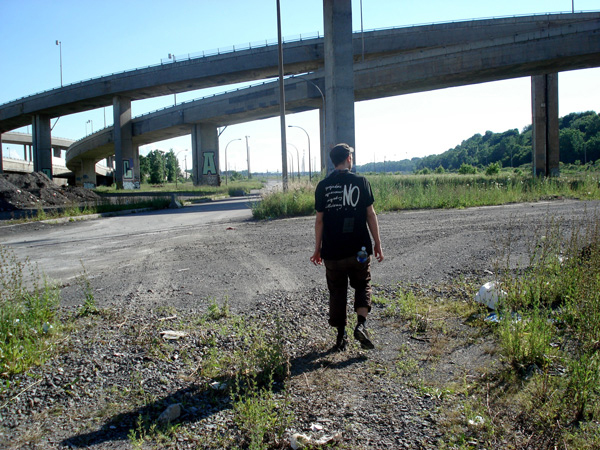 Convergence and difference in the yards, 2008.

To encounter the queer sublime in the Turcot Yards is to experience of the imminence of the interchange: it hangs suspended over us, conveying the feeling of something ready to fall or to happen, and implies the act of being attentive to, the act of coming near, of approaching and coming together, while remaining separate and distinct. To say that the Turcot Yards provides an experience of the queer sublime indicates that it entails an aesthetic process of alternative community-building in an unplanned, unprogrammed space of difference, outside of the normative design structures of the city. The queer sublime specifies that social groups that do not fit into the city's imagined binaries can create a realm in which difference (between each other, between oneself and the space, between this space and the rest of the city) is an integral element of social interaction. 14 While differences are often invisibilized in commercial queer spaces, the sublimity of the yards as an interstitial site allows for a "more complex experience and performance of identities" that is always in the unstable process of becoming. 15

1 The landscape of the train yards changed drastically between 1961 and 19 67, when the CN closed down the roundhouse and a majority of the tracks for the construction of the Turcot Interchange, which was unveiled by the MTQ two days before Expo 67. MTQ purchased the yards from CN in 2003.

3 While the majority of Saint Henri residents that I interview identify to some degree as queer, this is not necessarily the primary signifier of identity for individuals or the community at large, which is anti-capitalist and also consistently evades essentialization in its multiplicity. As the Mary Nardini Gang writes in the self-published 'zine towards the queerest insurrection , "queer is not a stable area to inhabit. Queer is not merely another identity that can be tacked onto a list of neat social categories, nor the quantitative sum of our identities...Queer is a territory of tension, defined against the dominant narrative of white-hetero-monogamous-patriarchy, but also by an affinity with all who are marginalized, otherized and oppressed."

Danielle Lewis focuses on the intertwining processes of art, space and the everyday. She has written and given lectures on feminist and queer spatial issues, the politics and poetics of "home" and squatting, the history of utopian design and planning, community urban activism and aesthetics. Her MA thesis, Becoming Monuments and Embodying Utopias, explores the ways in which inflatable architecture can provide prototypes and platforms for resistant and alternative creativity in the everyday life of the city. Danielle also maintains an artistic, organizing and collective practice that ranges through video and performance, 'zine production and distribution, collaborative design and construction.