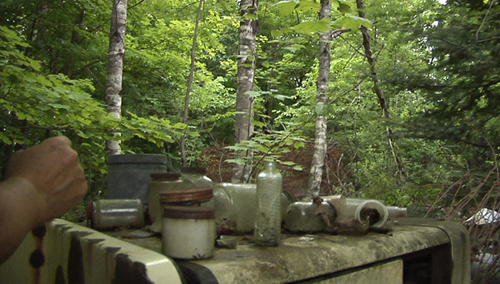 Language of marshes,
language of the roots of rushes tangled
together in the ooze,
marrow cells twinning themselves
inside the warm core of the bone:
pathways of hidden light in the body fade and wink out.
Marsh Languages, Margaret Atwood

Our story begins at the confluence of two massive riverine watersheds: the Ottawa and the St. Lawrence, which kneel most of North America’s freshwater down to the sea. Let us rise upland now from the flowing-together, from Montreal: along the wide fertile plains which lift slowly to the rocky knuckles of the Boreal Shield, the land between the rivers: The Upper Country – Le Pays d’en Haut, Kitakìnan, Tìr nan Craobhan. These are the rivers my ancestors would travel up to clear forest and farm. In and among the tracts of Sugar Maple, Elm, White Pine, and Hemlock there are still farms. There are still towns, mills and factories, suit stores on empty main streets, chip stands and the suburbs and streets of the capital.
Dionysos Dendrites grips his thyrsus.

But it is now a place of ghost towns: fallow, overgrown fields and boarded up gas stations along the winding roads. Successionary forests now cover stone walls and foundations, piles of farm machinery. This is its chief characteristic – at its core is insistent abandonment. After centuries of rapacious leveling, the region is seeing an overwhelming return of forests. This land is unceded from the Algonquin Anishinàbe First Nation – never signed away – who have had their massive land claim finally accepted for negotiation by the Crown. The implications of settler abandonment and subsequent sylvan regrowth are therefore vast.
A Memengweshiinh fleets just beyond a mossy footfall.

There have been two languages to die in my family within memory – Gàidhlig Gaelic and Anishinàbemowin Ojibway. I study them at night in my room by myself. In the winter. My father’s father’s father’s father’s father’s parents named their first child Seumas Ros. He and his family left their homeland Alba Scotland during the Highland Clearances, with English industrialists turning their homeland into sheep pasture and a tidy profit, enclosing and seizing commonly held land, leaving thousands without homes. So, while convicts filled one colony, my family was sent to fill another. And by the end of the 1800s, in one of the most sweeping, rapid deforestation events in North America, Eastern Ontario’s entire old growth was logged or slashed and burned for agriculture. But no lumberjack, bûcheron, coilltear or kìshka’àkwewininì was to prosper from the cuts. Those same English gentlemen who forced my family from their homeland were made rich beyond their filthiest dreams once the timber (these same refugees chopped) was sailed across the ocean, to be sunk in Napoleonic naval battles.
Artemis poises an arrow.

It would be a mistake to assume these people eagerly took up their new land, axes in hand, with nostalgic visions of their clear-cut homeland. No, persistent hylophobia, forest-fear, unsettled the colonists and earlier travelers from the very beginning. Settlers were terrified of the looming shade and its supernatural denizens and cutting the trees was utmost priority approaching spiritual duty, supported by financial reward from the Crown. Beyond the paranormal, a long history linking queer, female and anti-social bodies with the hinterlands: the forest landscape was brutally at odds with settlement, the family and above all with the precarious success of the North American agricultural colonies. Medieval forests in Europe once sheltered lunatics, banished men and medicine women. The memory of counter-hegemonic, dehumanized forest denizens was refreshed in settlers’ sight of First Nations people, whose residence in the forest and resistance to its clear-cutting fit straight into this threatening narrative. A forest is land waiting to be claimed. Queer men have always found each other in the forests, and specific forest places connected to cities have been in continuous use since the 1600s. Queer people have also started forming intentional communities for nearly half a century, reclaiming the forest and the field across North America and Europe (including Anishinábe territory) as their outlander yard.
Loup-garou draws breath.

The pine and spruce trees have grown quite tall around the graveyard housing the bodies of my Seumas James and Ealasaid Elizabeth. It is named ציון, Zion after the mountain near Jerusalem which refers metonymically to Israel itself, central to the exhausted Levantine mythology that was exported to Scotland a thousand years before it would come to cover the sacred geography of this territory too. Only now can our transplanted, translated European elsewhere/everywhere embrace the forest. Only with its threat neutralized, the forest rendered an endangered artifact can we revel in a Group of Seven landscape, or in national parks, cleared of people, no-place. One hot spring in 1987, five generations later, I too was named Seumas Ros James Ross.
A Wìjigò stalks through the blowing drift. 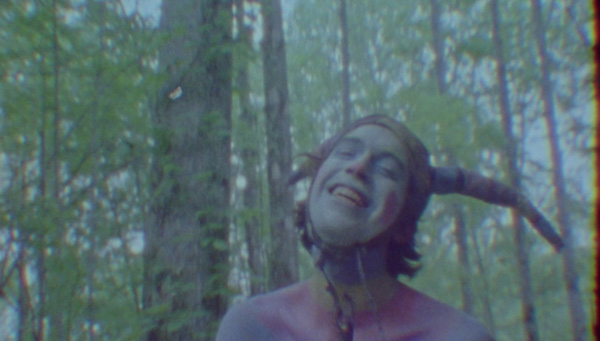 We are missing a whole class of investigators – those who would investigate the natural world in terms of human meaning. I’m given language as ur-metaphor. Far beyond the parallel extirpation of local linguistic and environmental biodiversity, language and speech give us a way of acknowledging the very passage of history itself – Fustel de Coulanges’ silent revolutions by way of the shift and pull of dialects. So many ways of speaking soaked into the fertile earth above the confluence, hundreds of unique dialects clumsily sorted into languages as dictated by nations: Kanien’kéha, Anishinàbemowin, Gàdhlig, Gaeilge, Kaszëbi, Français, English.

The strike of comprehension, a foreign word understood. Epiphanic logic, trusting the momentary crash of ecstatic understanding. We can wrest our history from rationalism, from the burden of empiricism: everything that Enlightenment shone onto the dark forested continent of North America and we turn down the glare. Dig your fingers into the humus. Words settle into the topography, each utterance collecting among the decomposing leaves. Even the softest speech echoes slightly off the things it surrounds, however below an audible volume, and ricochets off forever. Language calls us together, drives us outwards from our skull bindings into the social world. I speak my longing for the forest, urge its growing back, and break all the windows in the old farmhouse.

It’s not by chance, either, that logos means collecting and binding before it means symbols and speech – it means longing. No speech stronger than epiphany, when the gears of grammar and the lexicon cog click magically into place, where we reach out and join with a sudden force the object of our desire. The man and the mountain peak of high Romanticism, me and my fluvial confluence – the sublime venting upwards from obscure archival study, from crackly Smithsonian recordings of Irish ballads of the Ottawa Valley to the satellite imagery, to filming from the 3-seater Sesna ramping. Epiphany can be a touch, not a flash: feeling around in among the leaves at the top of the year, and suddenly making contact with a piece of glass, an arrowhead, a condom, a root. On June 1613, Samuel de Champlain dropped his astrolabe in the forest in Ottawa Valley near Muskrat Lake, Wàzhashkozàga’igan, and it was picked up by a boy in a farmer’s field in 1867.

It is radical for an artist to be given the right to speak with authority about statistics, geography, linguistics, demography. Despite my exercise and appreciation of this right, it is important to react to positivism in critical ways and to accept the essential flaws in this framework of knowledge. To step down from the position of power is important. I let stories speak, the stories and their tellers. I give voice to non-human people and their fierce expressions of purpose. I won’t be beholden to their standards of truth-telling – not I. My truths will are cut-outs, quotes unattributed, and glued together from books stolen from chain stores. And by the hum of forest machines muffling the Sugar Moon maple spunk drip, I speak the words gasping and step into the smoky mirror, into the forest of words, the forest of longing.

The sibilants and gutturals,
the cave language, the half-light
forming at the back of the throat,
the mouth’s damp velvet moulding
the lost syllable for “I” that did not mean separate,
all are becoming sounds no longer
heard because no longer spoken,
and everything that could once be said in them has
ceased to exist.

The language of the dying suns
are themselves dying,
but even the word for this has been forgotten.
The mouth against skin, vivid and fading,
can no longer speak both cherishing and farewell.
It is now only a mouth, only skin.
There is no more longing. 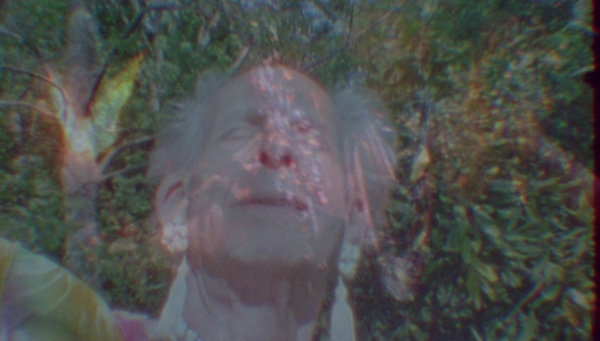 Jamie Ross is a queer, non-indigenous visual artist and writer based in Montreal (Mohawk traditional territory). His most recent work is an experimental documentary film and written work entitled Fallow La Friche looking at the decolonization, the abandoning and abandoned settler geography of the region occupied by his ancestors: queering the reforestation of Eastern Ontario. It will be published later this year. His most recent critical geographical article If a Tree Falls was written for the Media Co-op and the Mass Ornament (2011). JamieRoss.org