In a society where information, code and law are forming an increasingly powerful trinity, ideas such as the commons, freedom and openness have developed strongly as part of the free culture movement to provide an alternative to the increasing locking down and control of culture. As a result, we are witnessing today a growing artistic response to this issue in the form of works that provide support to this alternative.

Practically, it should not be taken for granted that these creations are able to always communicate in a meaningful way. The popular "free as in free speech, not as in free beer" quote from Richard Stallman 1 is the best example to illustrate the complexity of communicating an idea such as free software, and from which the free culture movement takes its ideals.

In fact, works that are produced in the context of free culture all have different values and purposes as not every artists perceive or relate to this alternative the same way. In return this is affecting how art within free culture, as a whole, is perceived once experienced by an audience.

If one looks at the works, performances, installations, lectures and workshops programmed in free software and art festivals such as Piksel 2 or make art, 3 it is obvious that, despite the commonly free culture flagship, none of the projects shown there are equal in their functions and purposes. Yet, it is possible to isolate dictinct threads of intention. For this reason, and as a first step to dive into such artistic pratices, I propose to classify free cultural works in four categories:

Such a creation is the work of artists, designers, musicians, writers, video makers, etc, who through their conscious choice of not using default copyright mechanisms for publishing, become supporters of a specific form of licensing and creative process. For example this can be a musician releasing his work under a free culture approved Creative Commons license, and also the type designers from Open Source Publishing releasing their work with an open font license, 4 or the the writer distributing her or his text with a Free Art license, 5 etc.

The reflective creation takes it one step further, as it does not just support a specific license, or set of licenses, but instead uses licensing as a way to engage its audience directly with the cultural and artistic issues addressed by permissive, open or free licenses.

An illustration of this category is for instance Rob Myers' "CC Ironies". 6 The work is a form of nested art in which the artist has been articulating the tensions between authorship, appropriation, attribution, collaboration, copyright and creative commons on the three levels of icons, indices, and symbols. Building upon Carey Young's use of legal document as sculpture and installations 7, CC Ironies is the result of a discussion between Myers, Marija Vauda and Nikola Pilipovic (MANIK), and David Bausola on the topic of copyleft as form, more particularly the social and legal form that copyleft is intended to be and the way that it can or cannot affect the aesthetic form of art 8. 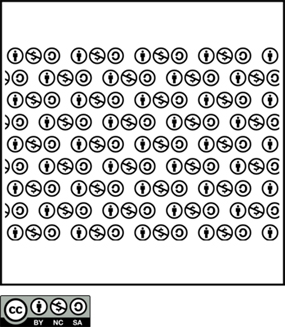 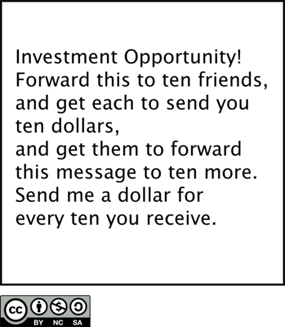 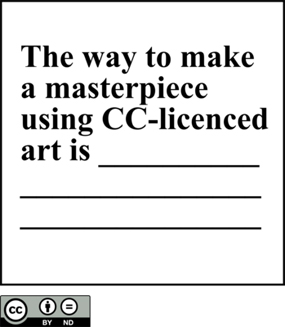 Also busy with the communication of a concept, the militant creation is more radical as it is manifesting itself as a platform to convince and rally its audience to the system or methodology it embodies. By doing so it remains often within the mechanical wonders of free culture and open source practices.

For instance, the project Ars Combinatoria 9 is "about creating new works with public domain or openly licensed images, sounds and texts." The main intention of the authors is to educate on the principles of public domain and open content licenses and as a result the project focuses solely on the legal category of the material used for the collage, that are the licenses it relies on, and the online services that give access to such material. The methodology relies on three steps: 1. where to find such material; 2. how to recombine them into new works; 3. how to share the new creations, that is, how to license them and where to publish them back. There is no attempt to contextualise the aesthetics of such a process and its output in perspective of other forms of collage and so-called remix cultures. By doing so, it misses an opportunity to critically examine the creative process and the recycling of information within digital folklore. It's simply not its goal.

Finally, a more challenging category is the transposed creation, which takes the structural and methodological approach of the militant work but shifts it entirely by suggesting to look at it from an entirely new point of view. Such works demonstrate that it is perfectly possible to engage with issues related to free culture as a trans-disciplinary practice.

A successful example of this category of work is Fibre Libre. Fibre Libre is an "artist's book that tells the story of a group of people, learning about free software while learning to make paper". It was initiated by Bridget Elmer as part of the Open Edition project. 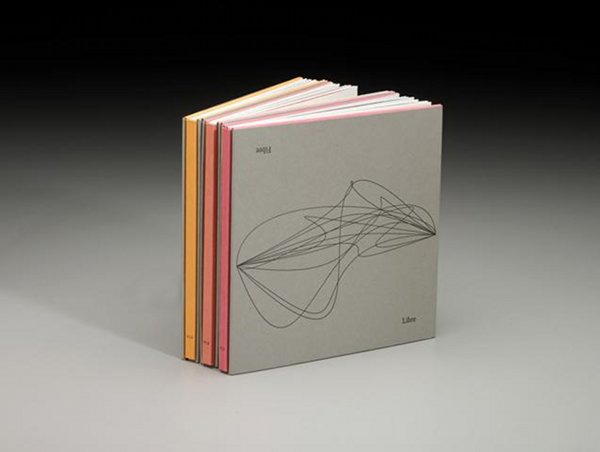 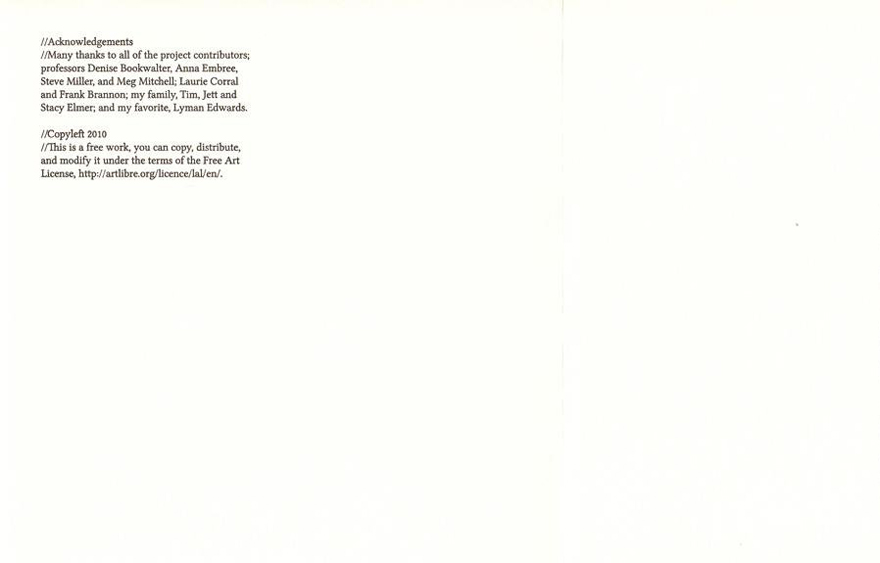 Fibre Libre 10 is a free work and is made available under the free art license. The book, that is limited to fifty handmade copies, represents a narrative that unfolds both in space and time. The different contributors branched and forked each others recipes used to make the different revisions of their "Open Source Paper", and reproduced the same pattern of investigation while learning how to create graphics with the software Processing. Eventually, the generated graphics are printed on the paper, as well as the sources, whether they are instructions to make the paper, or the code for the Processing graphics. Next to that the graphics itself are a coded representation of how the hand made sheets were produced with each curve representing one of the ten participants. 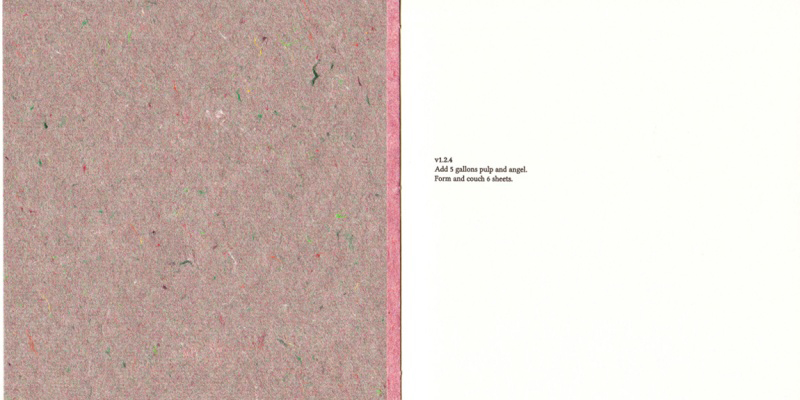 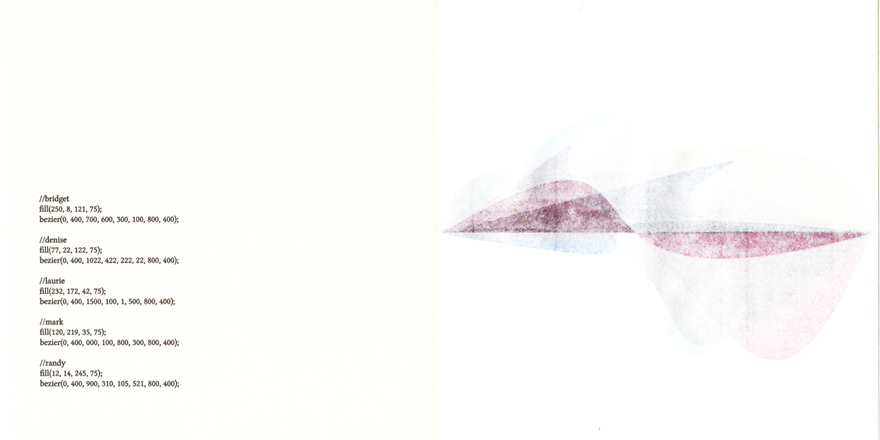 According to Elmer 11, this journey is a thoughtful introduction to free culture for those who are practising their art through the medium of the book. Bridget Elmer initially discovered bookmaking from the zine and self-publishing culture, and sees a lot of similarities between those coding with free software and those printing their books from redistributed lead type on the letterpress. Fibre Libre is a way for her to work through the similarities and differences of the two cultures as a means to understand what free culture is about. 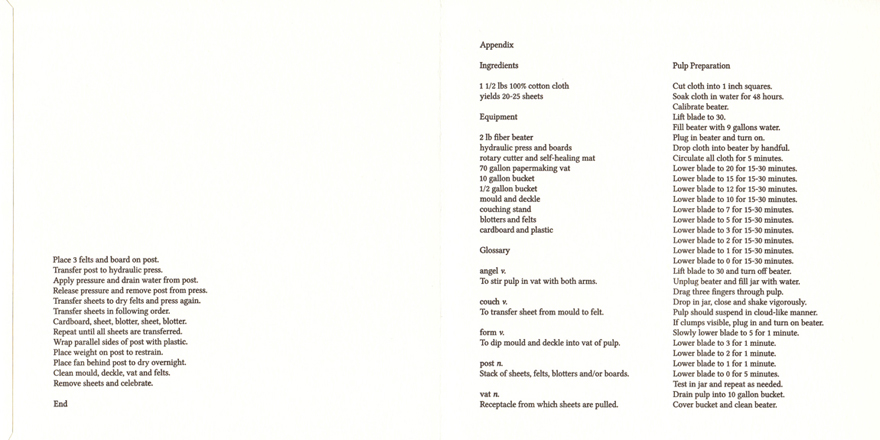 Free as in cheese

For each of the categories above, the partisan, the reflective, the militant and the transposed creation, if the artist fails to grasp the complexity of the issues she or he aims to relate to, we are likely to enter, not without irony, the grey zone of content appropriation, more particularly, style appropriation. It is not a fifth category, it is a threatening layer that exists on top of the classification suggested above.

James O. Young suggests to use the term style appropriation when "artists do not reproduce works produced by another culture, but still take something from that culture. In such cases artists produce works with stylistic elements in common with the works of another culture." 12

We can extend his definition to gather works that pushed the boundaries of the four categories above to the point of loosing focus or generating conflicting positions. Said differently, it is frequent that artists go beyond the free cultural inspiration and metaphor and end up creating instead all sorts of free cargo cultures. For example it is often that copyleft is wrongly associated with CC NonCommercial licenses because of the the ShareAlike attribute, 13 or worse, the copyleft logo becomes a political mark for non copyleft licenses, as it is frequent in free netlabels. Last but not least it is increasingly trivial to attach a specific ideology to free culture instead of understanding it as a hub where many different viewpoints collide.

In the end, such involuntary misunderstanding can potentially harm the debate around copyright and artistic freedom. Indeed seeing these misunderstandings as none the less valuable contributions to the discussion, we must admit, alas, that all roads do not always lead to Rome. Eventually, such creations once released and experienced are more likely to further obfuscate issues that are already complex by themselves, contributing to an increasingly large positive feedback loop of misconception.

Ultimately, it is not so much the misuse, or control over a particular jargon that is harmful, it is the failure to understand and recognise the unavoidable existence of concurrent definitions and agendas. Assuming all these efforts point toward the same direction is naive. Freedom, openness, collaboration, participation have become highly fashionable interchangeable words. Everything is free or open, or both. Not just software, but also hardware, services, relationships, companies, workflows, industries. If it's open it must be good, and it certainly is for businesses and lawyers.

To paraphrase Benjamin, in such a situation artists are then more likely to end up supplying, once again, a productive apparatus without changing it. 14 This problem is clearly visible with the infantilisation of authors that happens, for instance, with the Creative Commons' plea for human readable deeds, that keep content creators away from the more "adult stuff" that are the lawyer readable texts and the "techno stuff" that is the machine readable metadata. 15

No matter which category a creation might belong to, it is crucial for artists today to re-evaluate the purpose and impact of their work within free culture. For instance, looking at artistic projects spawn and supported by groups such as genderchangers, 16 Access-Space, 17 servus.at, 18 to name a few, it becomes clear that free culture really shines when it is associated to a broader social context and when used as an enabler, a transitional framework, not an end.

Failing to understand this may well reduce in a near future the function of an "open source" art as disposable entertainment material siting in endless content libraries, and which sole existence will, in the end, fail to bootstrap any culture worth remembering.

///
This text is an edited extract from 'Free as in cheese: artistic confusion at the edge of openness.' Copyleft: This work is free, you can distribute and modify it under the terms of the Free Art License. http://artlibre.org/licence/lal/en.
///

5 For instance this very text is made available under the terms of the Free Art License 1.3.

14 Walter Benjamin, "The Author as Producer", in Work of Art in the Age of Its Technological Reproducibility, and Other Writings on Media (Cambridge: Harvard University Press, 2008), 86-87.

Aymeric Mansoux (FR) is an artist, musician and media researcher.

In 2003, he founded GOTO10 with Thomas Vriet, a non profit organization and artist collective, with the goal to promote the use and support of free software in electronic music and media art creation. Aymeric has been active in the collective until 2010 and initiated several projects such as: ‘make art’, a yearly international festival for software
artists and musicians using and writing free software; ‘Puredyne’, a popular live GNU/Linux distribution for media art and design and the ‘FLOSS+Art publication’, the first collection of essays on FLOSS and digital art production.

Since 2009, he is core tutor and co-supervisor of study for the networked media branch of the Media Design and Communication Master of the Piet Zwart Institute in Rotterdam (NL). Aymeric is also a PhD student at the Centre for Cultural Studies, Goldsmiths, University of London, researching the creative misunderstandings between art and politics within copyleft practices.