By Amber Berson No: 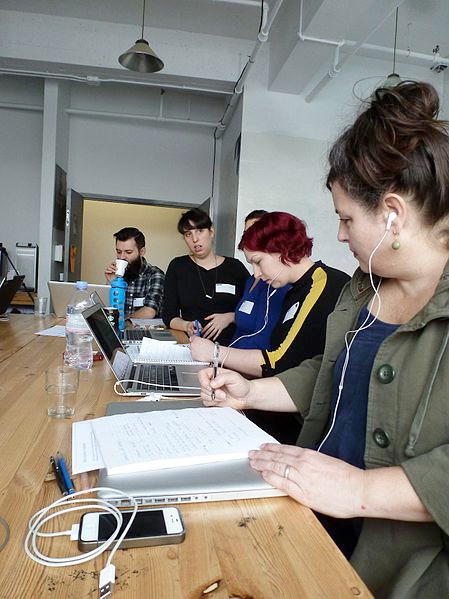 On February 1st, 2014, people around the world gathered in front of their computers to participate in the first ever Art and Feminism Wikipedia Edit-a-thon. The event had two important goals. In a 2010 survey, Wikimedia found that less than 13% of its contributors are female. Aiming to address this very serious gender disparity amongst editors, I invited women-identified people to come to Eastern Bloc in Montréal to learn about contributing to Wikipedia. The global event, which had a secondary goal of adding content in the areas of art, feminism and specifically feminist art, generated over 100 new pages of content and made important contributions to hundreds more.

On February 1st, 2014, people around the world gathered in front of their computers to participate in the first ever Art and Feminism Wikipedia Edit-a-thon (http://artandfeminism.tumblr.com/). The event had two important goals. In a 2010 survey, Wikimedia found that less than 13% of its contributors are female (http://www.wikipediasurvey.org/docs/Wikipedia_Overview_15March2010-FINAL.pdf). Aiming to address this very serious gender disparity (https://meta.wikimedia.org/wiki/Gender_gap) amongst editors, I invited women-identified people to come and learn about contributing to Wikipedia. No previous experience was necessary and volunteers were on hand to coach newcomers in setting up accounts, editing and creating articles on the world’s largest open-source encyclopedia. 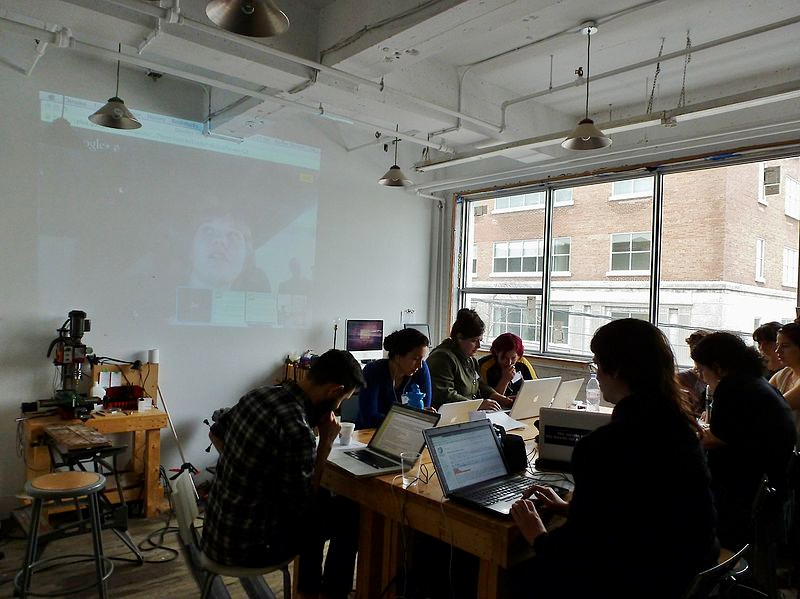 The project aimed to address the relative lack of articles or the high levels of stub articles in the areas of art and feminist discourse. Those most in need of redress was where art and feminism intersected. With over 30 participating cities hosting hundreds of participants and thousands more participating virtually, it is safe to say that the project was a success.

The original idea for the project came from a group of like-minded individuals, mostly based out of New York City. The NYC iteration which took place at Eyebeam and got the ball rolling was the brain child of curator and writer Jacqueline Mabey, art librarian Sian Evans, curator and current Eyebeam Fellow Laurel Ptack and artist and SUNY professor Michael Mandiberg. In Montreal, the Art and Feminism Wikipedia Edit-a-thon took place at the Eastern Bloc lab, a community space housed in the artist-run centre of the same name. Members of the centre were present to answer questions and were actively involved in helping run the event. Other affiliated centres and feminist art groups included Skol,  .dpi Journal and Studio XX. The day-long event was followed by an informal discussion over food and drinks at Notre-Dame des Quilles, a local bar.

Over thirty-five people participated in person, with other Montrealers participating remotely. Of the people who came to Eastern Bloc, half had no Wikipedia contribution experience whatsoever, one quarter had limited experience and one quarter were already proficient at contributing. We organized into mini-groups and went over video and web-based tutorials, with groups forming based on people’s individual learning styles. We also tapped into the broadcast tutorial from Eyebeam, which acted as the centralized venue for the project. Some people stayed the whole day, while others popped in and out. People were really keen to help each other out, with both content and form. It was a really nice time and very welcoming. There were people of various ages and gender-identification and the event had a real community-driven feeling to it.

Of course, the one-day meet-up was just the beginning. We hope to meet again soon in Montreal and we encourage you to get involved on Wikipedia and to edit anytime and anyplace.

If you are new to the process, here is a list of useful links to get you started:

“How to Create New Wikipedia Articles That Will Stick”:
http://www.hastac.org/blogs/wadewitz/2013/04/30/learning-work-wikipedia-new-pages-patrol-and-how-create-new-wikipedia-arti

Wiki “Art and Feminism: Results” (to record every article we have created or modified):
https://en.wikipedia.org/wiki/Wikipedia:Meetup/ArtAndFeminism#Results

Finally, if you participated at Eastern Bloc or virtually and want to sign in to the meet-up page, please do so here:
https://en.wikipedia.org/wiki/Wikipedia:Meetup/Montr%C3%A9al/ArtAndFeminism_2014