By Deanna Radford No: 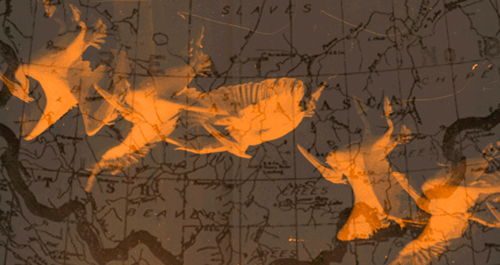 The first inspiration for the .dpi 25 theme Inevitable Transitions was the environment: concern for global warming and the de-regulation of industries that impact it negatively. The other main inspiration was drawn from the direct action occurring around the world in opposition to forces that bolster the political, economic, and environmental status quo. To step back and think critically about the timing of these things and what it means, evokes the feeling that we are at the threshold of great change, movement from one significant point in time to another or, an inevitable transition. The enormous groundswell of activity by individuals and movements around the world, particularly since the Arab Spring, speaks loud and clear about the issues. In view of the 2012 Quebec Student Strike, the Occupy Movement and other actions, how have artists been responding? Specifically, how have women, transgender, queer and feminist media artists and activists responded to these things in their work? The women from across Canada who contributed to this edition of .dpi do great work. They speak to this moment in time by means of a variety of concerns and through different art forms. Their concerns are interconnected. They are speaking against the status quo, are harbingers of change and help to reflect a fascinating point in time. Where the balance of power rests in considering an inevitable transition is always subject to change and is ripe for discussion. The contributors to .dpi 25 offer a rich tour of some of the issues. Whether commenting on our existing world or imagining new worlds by way of video, sound art, essay or image, they illustrate sensitivity and possibility. Step by step, we push and pull, we make change.

As the late scientist Rachel Carson asked when writing about the chemical DDT in 1962, changes perceived or portrayed as being inevitable may not always be palatable to the general public or serve for the public good. She asked, “Have we fallen into a mesmerized state that makes us accept as inevitable that which is inferior or detrimental, as though having lost the will or the vision to demand that which is good?” (12) In challenging the status quo, Carson pointed to a question of power in the chemical and corporate industries, and how it is used. Furthermore, the challenge to the status quo that she raised exemplified risk taking and helped to shed light on an opportunity for societal gain for purposes of health and safety. Carson was compelled professionally, morally and ethically to breach a gap of power at the risk of her own safety and career. The contributors to Inevitable Transitions bring to light important concerns in the same spirit.

Artist Nazik Dakkach was inspired by the work of early cinema for her contribution to .dpi 25. The banner image she created places the movement of pelicans across a map from the early period of expansion in the territory we now know as Alberta, Canada. Here, Dakkach fiercely questions the transition of land from its Indigenous people to colonial expansionists. She brings to life concern for the natural environment in view of bitumen and tar sand development from the region. This is also in view of the negative industry impacts on the pelican, such as DDT and the Deepwater Horizon Oil Spill.

Roewan Crowe's article “Slow Art in a Time of Flash Floods: What's a Queer Feminist Settler To Do?” gives an overview of the artist's artwork. It incorporates reflection on her own artistic practice while addressing concerns for post-colonial development of land in North America. Crowe illustrates how that development has set the stage for violence upon the land and people. In a profound and reflective manner, Crowe questions the interconnectedness between such acts and unnatural disasters such as Hurricane Sandy.

Karen Hibbard is an artist and educator who questions what happens when animals fight back ? Borrowing this question from a title within Rachel Carson's Silent Spring , Hibbard's artwork juxtaposes renderings of animals and garbage trucks with landscape and plastic water bottles. The end result is an inspiring critique of popular consumption habits, simultaneously playful and cutting.

Sabine Lebel's "Anxious Landscapes: Burtynsky's Photographs and the Possibility for a Feminist Risk Politics," is an examination of risk culture in photographer Edward Burtynsky's work. Her feminist reading of Burtynsky's subject matter looks closely at the tensions generated by his documentation of mining, quarrying, manufacturing, shipping, oil production, recycling and water industries around the world. With duly illustrated concern for the environments Burtynsky photographs, Lebel explores what the implications are for the viewer as consumer, as art historian, and as feminist, when taking his work in.

Sound artist Sarah Boothroyd's sound piece “Pay No Attention to That Man Behind the Curtain” pulls the sonic curtain open to reveal the unwanted machinations related to radio journalism: the setups, the outtakes, and moments in-between conversations with interviewer and interviewee. Boothroyd underlines the nature of broadcasting voices for transmission for the purpose of broad communication where, as she explains journalism, “as a process of editing and selecting, rather than transmitting a complete record to the public.” Boothroyd's piece is evocative and urges listeners to reflect on forms of media-based information we receive.

As anthropologist Margaret Mead has been attributed as saying “Never doubt that a small group of thoughtful, committed citizens can change the world.” The contributors that comprise .dpi 25: Inevitable Transitions , give voice to important ongoing matters where silence is often popularly accepted as the norm.

Deanna Radford is a poet and author with a passion for in sound art, experimental music and text. She took her BA in English and Political Science at the University of Winnipeg, and is carrying out studies in the domain of digital art and design. She published a book of poetry in 2011 entitled Building Ground. She has contributed to MUTEKMAG, MusicWorks and Herizons magazines, among others, and joined the .dpi Editorial Committee in 2011. She served as an administrator for several arts-based cultural organizations and is a strong believer in community-based efforts.