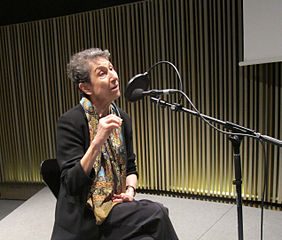 Review by Deanna Radford with files from Candace Mooers.

Silvia Federici giving a speech at MACBA museum in Barcelona May 2012. Image by Kippelboy, from Wikimedia Commons.

The war on women, explains author, scholar and anti-capitalist activist Silvia Federici, is waged in a fight for the means of social reproduction. Encompassing more than the reproductive rights of women, Federici defines the means of social reproduction as the land, fisheries, the sea, forests, sources of fuel, coastlines and so on, first. As globalization unfolds and mutates, it appropriates these means for expansion.

Federici was in Montréal April 4th for the launch of her book, Revolution at Point Zero: Housework, Reproduction, and Feminist Struggle (PM Books). The book comprises essays from 1975 to 2010. She spoke to a capacity audience about the collection and about the experiences that have shaped her worldview.

Just over a year ago Federici gave a different talk in Montréal, at the dawn of student-led social uprising, where she outlined her use of the phrase war on women. "I prefer [to use] the concept of war because [it] brings out the continuity between past and present and also lifts the idea of domestic violence against women from the purely domestic environment in which it is always confined, and brings out the institutional root."

Furthermore, "the economic system, capitalist system… not only breeds violence against women but in many ways requires violence against women to the extent that it is based on the devaluation of many activities that have been traditionally associated with and are continuously being imposed on women." Federici was one of the founding members of the International Feminist Collective in 1972 and in the 1970s, she lived in Nigeria. She described her experience of living in Nigeria during the oil boom at this time. Living near the Niger Delta, she was told that at one time in the not-distant past, the waters had yielded fish so plentifully you could stick your hand in the water and fish would emerge. At the time Federici arrived, people had to buy frozen fish from another region of the country because the water was so polluted. Federici said, "we were witnessing the biggest drive of land expropriation on this planet." Many everyday-people made a living by way of the land (subsistence agriculture), rather than by provisions from salary-based income.

As we know, the land grabs continue in Africa, throughout Latin America, in Asia and Turtle Island and against Indigenous peoples. The big energy industries expropriate land and "in terms of social relations, they are not simply commodity producing outfits." Federici says, "they also generate a whole system of relationships." These relationships bring about concerted attacks on resources like education, health care, access to abortion, government service programs, public transportation and so on. Subsistence agriculture, she explains, "has often meant the difference between life and death for people."

As we continue to witness, the main response to this has come "from women who have begun to re-occupy some of the territories, some of the lands that have been taken away from them and [work for a] more new communal form. In Africa, women began in the 1980s and 1990s to take over any piece of land - whether in the city or rural areas; land-squatting, engagement in land struggles." Federici says, "today they attempt to basically take over plots of land, de-privatize the land and in this process also break down separation between power and between rural and urban."

During her 2012 talk, Federici outlined several key tenets of her thought that also underline what she discussed this spring. One such term builds on the notion of land grabs, in what she called the militarization of everyday life. The ongoing struggles that women and workers endure to break down separations of power is real and mutate their way around the globe. Federici's writing and activism gives a global history of these struggles, makes it pertinent to contemporary attacks on current day systems, and drives home the reality that the struggles continue.

In many ways, the ideas and information that Federici discussed this spring behold information that is not surprising. However, the way in which she frames her ideas and details makes her message crystalline and powerful; it exemplifies a deep history at the time of late capitalism and a reality that is becoming more urgently an issue for all of us to take ownership of.