By Amber Berson No:

Last year, as part of the Sight & Sound festival, Eastern Bloc invited Swiss artist Valentina Vuksic to present Tripping Through Runtime. Her work explores the possibilities afforded by hard- and software hacking or mediation. Both her performance and workshop as part of the festival, which I co-organized, were deeply moving and spoke directly to the issues around hacking that .dpi is investigating in this issue. Beyond challenging the physical material to produce a sonic aesthetic that is at once native and foreign to the work, Vuksic's performances are an articulation of her thinking around visibility and invisibility and the spaces we inhabit. I was interested in speaking with her about her practice and about the specific ways she bugs and debugs the system – the computer and the mostly male-dominated sound and digital art performance world.

Vuksic creates the conditions necessary for the work to exist, she manipulates the electromagnet output to create interesting results. This has some resonance (pun intended) for me in thinking about the ways in which we organize as a feminist collective. It's not enough to observe the socio-political climate. Rather, you need to somehow engage with the processes that are already at play.

What is it that you do, in your own words. What are you trying to show/tell about your practice and to an audience?

I approach software and computers with pickups that capture the electromagnetic smog that surrounds electrical devices. In the case of the computer, many processes are running concurrently -- partly in the background, partly triggered by a user and visible on the screen. While they are processed, they alternate the power flow on the motherboard and its components, e.g. the graphic card, processor, memory, and produce changes in the radiated fields. The electromagnetic emissions can be converted to an acoustical signal and listened to. Only emissions in the human audible range are recognized though.

I want to make an environment that hosts computer processes and makes them accessible in a non-analytical way and is enjoyable in its variety of sound structures, patterns and irregularities, in its spheric and harsh sounds. In the long term, I am interested in what could be read from the electromagnetic signature of operating systems and software. Not necessarily in the sense of reverse engineering, but rather, aspects of programming techniques and cultures.

An idle operating system can also sound interesting. It has some background processes running, which might create meditative rhythms without any user action. I can further manipulate the electromagnetic output in the way I use the computer. Which operating system is used, which programs are running and moving the mouse all effect the sound. Different computers sound different as well, so I try out various things and rehearse “playing” it. In performance I either improvise or follow a choreography of user actions or run automatic programs to create the sounds.

How much is the audience relevant to your work?

The audience is invited to imagine this other level of reality, if I may call it that. I myself find the thought intriguing, that all sounds and occurring patterns are side effects of the engineering process of hardware and software developers. A problematic issue is the amount of hints given, by showing the computer screens alongside the sounds, which might draw the attention too far away from the sound. Besides, it's not expensive and rather easy to pick up the emissions oneself. I constantly wonder how much information an audience needs to follow along with the sounds. Some people would like to see the screen always, others feel distracted by it. The equipment is simple, therefore it's not a big effort in listening to your own computer. What is a little more difficult is reducing some of the constant noise, which might cover more interesting sounds underneath. 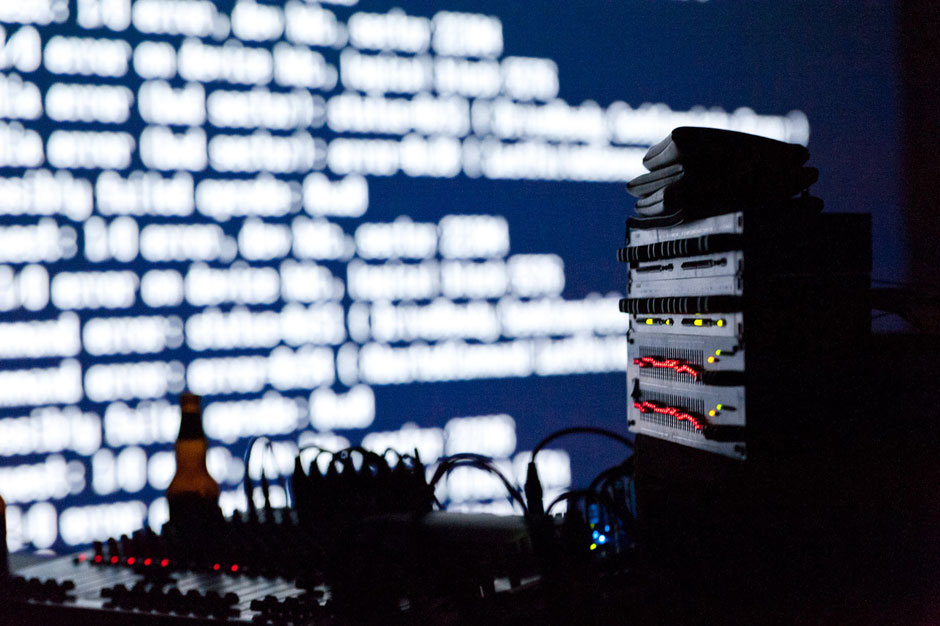 Do you consider your practice political?

I would be interested to consider production conditions and hardware/software design strategies when investigating electromagnetic emissions. But I haven't found a starting point yet. It's possible to reverse the captured signals back to the source, to find out which keys have been typed and even which machine instructions have been calculated (see http://tau.ac.il/~tromer/acoustic). Maybe it's possible then to find clues in the EM fields about guidelines that have been applied in the software development, for example, or if many or few developers were involved. What's the difference between a Linux, a Windows and a Mac? What about motherboards developed in China or Taiwan?

Interview conducted over email between Amber Berson and Valentina Vuksic over several weeks between February and March 2013.

Valentina Vuksic is a computer artist and programmer based in Zürich. Her work is a personal exploration of the possibilities afforded by articulated hard- and software mediation. She approaches computer systems via inductive microphones for magnetic fields, so-called “telephone adapters.” With choreographies for software and computer elements, she utilizes these as actors in software/noise pieces for, and in, computers. Vuksic considers time and space of computer processor and memory as levels of reality. Software being processed creates its own temporal and spatial dimensions, which are staged for a public. She aims for a sensual experience of the analytical sphere becoming concrete, where logic encounters the physical world. The mechanic noises serve as mediators to a public. They reveal in an immediate way the activities taking place between computer processes in the widest sense and the computer electronics they are running on.