The Self and Others: Trans, Queer, and Feminist Performative (Self)Representations 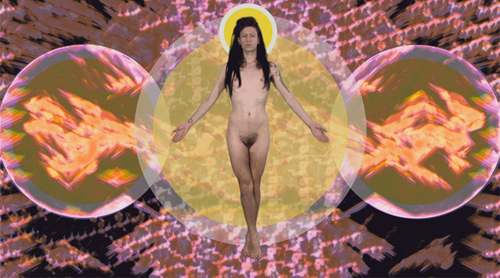 Every person occupies space in a manner unique to themselves, informed by and informing the individual's beliefs and experiences. The assumption that there is an ultimate way of being propels oppressive practices ranging in sphere of impact from entire landmasses and populations in the millions, to a spot on the couch and the person in it.

The power to define the growth, change, and interaction of one’s own body is tied to epic struggle for many persons marginalized on the basis of race, gender, sexuality, and class. The responsibility to address one's own privilege when seeking such power is another struggle, intertwined with the first. Presenting positions critical of the church, state and status quo, this issue of .dpi joins a cloudburst of creative counter culture. The resulting flood denies the mainstream its singular channel. The works featured here represent a series of unique perspectives. They are queer, trans, feminist, and linked by intersecting concerns with autonomy, social responsibility, and self-representation. Addressing an array of connected issues including bodily self-determination, colonial oppression, and community representation, the artists and authors use their own bodies and/or experiences to produce politically engaged, critical, and highly personal works.

Elie Darling’s Body in Progress takes listeners through two years of their voice as it transforms with the use of testosterone (T). Recordings of voice change progression by transguys and genderqueer people on T have recently been popularized through public forums such as Youtube. Many trans artists have likewise explored their own trans bodies in flux. For instance, Loren Cameron's self-portraits present a hardbodied transman posing with a needle that subtly refers to the injection of T. Describing her cyborgic journey to becoming a hyperfemme bombshell, Nina Arsenault's theatrical piece “The Silicone Diaries” gives voice to the vision that is her body after sixty-something surgical procedures 1. Where Darling's work diverges from Cameron and Arsenault's visually arresting embodiments of intentionally idealized masculinity and virtually chimerical femininity respectively, is that the artist/ “model” is unseen. Here, Darling invites a consideration of the body completely abstracted from its visible and tactile attributes. The trans voice is given primacy as Darling withholds image and steps outside of the realm where assumptions are most often made.

Taking on a hypersexual and intentionally stereotypical persona, Granados fiercely re/claims the language of the Internet to confront the viewer with a powerful anti-colonial message. Blowing up the camgirl figure, and in particular her stereotypical Latina incarnation, the artist explodes objectification and complicates the viewer’s reaction to her exaggerated sexual gestures through assertive political statements pertinent to Latin American lives. that complicate the viewer's reaction. In Anti-Imperialist Sucette, Granados gives viewers permission to take in her image as she sucks off a condom-clad gun, while imploring them to consider the violent reality of imperialism in colonial states. In Compulsory Maternity, the artist gurgles through a mouthful of semen to denounce the repression of reproductive rights, specifically the right to safe and legal abortion.

JJ Levine's photographs capture queers in their home environments. Each subject locks eyes with the viewer in a direct gaze that recalls traditional portraiture while fiercely claiming space for representation of contemporary queerness and transness. Levine's images historicize domestic expressions of queer and trans identity and assert their importance among the narrow understandings of home and gender expression pervasive in mainstream Western culture. The presence of each subject in their own home is a proclamation of ferocious domesticity. Each sitter is rendered in loud colour and framed by elements of unapologetic queer kitsch. The simultaneous calm and force of a femme in a bright orange sundress posed on a leopard print couch beneath a floral cross stitch that reads “deep lez” reflects the forces at play in the creation of autonomous living spaces for radical trans and queer people. Warmth and tenderness among chosen family is a call to hang up the hard outer shell when coming home. On the other hand, a hard stare from each of Levine's subjects reminds viewers that these homos getting cozy on the couch are lionhearted defenders of their space.

In their collaborative video, Let’s Stop Talking Now Virginie Jourdin and Rebecca Lavoie seem to play potential lovers translating one another’s dryly uttered advances fro French into English and vice-versa. The piece is simple and repetitive, stripping erotic and linguist frictions from their charge to present the bare bones of linguistic exchange. The affect of the piece is not in what is being said- the phrases themselves are rather banal. Rather, is the absence of evocative body language and physical communication between the two possible queer sexual partners that brings force to the work as viewers are encouraged to consider moments when a Montreal identities are caught up in language, even in the face of mutual sexual desire and shared queerness.

Jamie Ross’s Landscape Tongues takes reader though a region of Eastern Ontario unceded from the Algonquin Anishinàbe, who are negotiating a land claim with the Crown. A narrative approach to the exploration of this region gives Jamie Ross creative means to unpack his own white, colonial ancestry an position himself as a “queer, anti-state, anti-colonial writer.”

Relishing in the astonishing scale of the Turcot interchange and delving into the queer punk anti-paradise that lies beneath its concrete mass, Danielle Lewis gives readers a taste of the queer sublime. The Turcot Interchange: Community Encounters With a Queer Sublime provokes thought on the transformative potential in traversing pockets of urban landscape forgotten by the mainstream. Left out of any rigid capitalist programming of space, such regions, Lewis argues, are spaces for conceptualizing radical alterity.

Guest Editor-in-Chief for this issue, Johnny Nawracaj is a Polish-born writer and video/installation/performance artist. In their academic and artistic pursuits they explore love, loss, and longing with a particular investment in these themes as a part of radical queer and trans cultural production. Their performance works have seen the cabaret stages, theatre vitrines, and gallery floors of venues such as Café Cléopatre, Théâtre Ste. Catherine, and Toronto's Xpace.