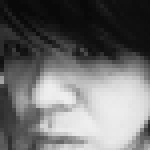 Sophie Le-Phat Ho is a researcher and cultural organizer from Montreal. Trained as an archivist, she has also completed an MA in Anthropology of Health and the Body in the 21st Century at Goldsmiths College (University of London) in the UK, following her studies at McGill University in Environment and in the Social Studies of Medicine. On top of having served as the Artistic Director of The HTMlles 10 | RISKY BUSINESS, the international feminist festival of media arts + digital culture, she has worked at the Daniel Langlois Foundation for Art, Science, and Technology, the Canada Council for the Arts, as well as Studio XX as Programming Coordinator and Editor-in-Chief of .dpi in its early stages. She was one of the curators of UpgradeMTL (Montréal), as part of the Upgrade! International network on technology, culture and politics, and has been invited to co-curate events by artist-run-centres such as Skol, DARE-DARE and Eastern Bloc. Her individual and collaborative writings have been published in Vague Terrain, esse arts + opinions, Inter art actuel, ETC, livedspace, Le Merle, among others. She has also served as Guest Editor for FUSE and No More Potlucks. As a co-founding member of the Artivistic collective (artivistic.org), she works at the intersection of art, science and activism.