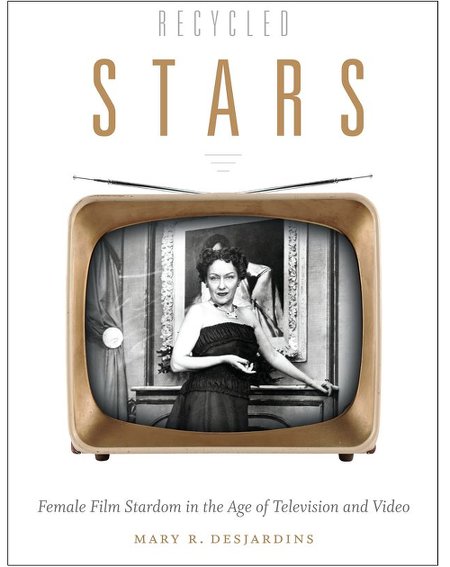 Mary R. Desjardins’ exploration into the origins of glamour, stardom, fame and the constructs of gender provides a rich, detailed, and powerful look at the female star and media industries. The book is a source of evidence for the many ways in which these industries take part in a constant reduction, reusing, and re-appropriation. The key areas of examination in Desjardins’ text focus on what solidifies a female star and her identity. With her new book Desjardins has provided readers with an in-depth investigation into this world in every form, while taking into account the social psyche from the very birth of television.

Film historian Mary R. Desjardins opens her book with a review of the American actress Gloria Swanson’s transition into television from film. Swanson was one of the first notable stars to have a television show. In the late 1940s and 1950s the television industry had a ‘’vested interest in recycling formerly popular stars who had been initially groomed by the film industry.’’ Desjardins writes about how ‘’this involved a renegotiation of their glamorous personas.’’ 1 Desjardins discusses within this chapter Swanson’s move to her infamous role of Norma Desmond in Sunset Boulevard after her television talk show. Playing the character of Norma Desmond. A This role would become synonymous with the actress. Key interests of this chapter include Desjardin’s noted importance of how the television medium at this time represented females as stars. Desjardins stresses the importance of keeping this perspective in mind at all times. She notes that there are four points involved in considering these early women of television: (1) the history of television criticism that connected problems of the televisual image with the problems of feminine spectacle; (2) the fashion and shopping show genres popular on both local and national television since the early 1940s; (3) female performers, including African American musical performers, making the transition from film or café society to television; and (4) increasing concern over the decorum of the female image on television in the early 1950s. 2

With the advent of commercial broadcasting Desjardins notes that “women were often used as subjects for experimentation with lights and makeup for early demonstrations of both mechanical and electronic television.’’ 3 She also notes the peculiar fact that along with the 1939 New York World’s Fair (where commercial broadcasting is considered to have begun) came “women being painted with cosmetics that looked far from natural in traditional filmic media but that registered as natural on television.’’ Thus, “real women would be used as tests and given rewards for displaying appropriate standards of feminine beauty.’’ 4 More support for these standards of feminine beauty came in the form of fashion and shopping genres which served as a platform for critics to extend discussion of “feminine competence, charm, grace, and glamour.’’ 5

A further, curious part of the glamorous persona is brought up: the trope of the ‘has-been’ actress. Desjardins is fully aware of the overabundance of present-day reality shows focusing on ‘washed up’ stars. In fact, most of the time these shows specifically fetishize any of the downwardly spiralling elements typical to an actress’ career. Demonstrably, this is appealing to an audience. In a move that was bold in film studios of 1950, Swanson took on the role of Norma Desmond--to worldwide acclaim. Sunset Boulevard is a film that exploits this ‘has-been’ character to the fullest extent. The fast and ferocious descent of this sad woman Norma Desmond is fascinating to watch.

Desjardins thoroughly and accurately examines the aging female film star as a trope and as a person. She explains and studies three genres that are key to the aging female star: domestic melodrama, gothic mystery or horror, and comedy. Because of the fantastical nature of shows from the late 1950s, such as The Twilight Zone, viewers were often treated to an array of serious topics under the disguise of fluff. These included topics that did not make it to other areas of commercial programming. A topic often seen in many gothic mysteries and horrors that Desjardins discusses is the “female investigation into her own space as she is haunted by a woman of another time.” Desjardins points out that some of the less critically favoured series that were dismissed should be seen as “a rich source of evidence about the contradictions in women’s lives in the prefeminist 1950s. The concerns of many female characters in anthology episodes –aging; fading beauty; midlife change; single life in a pro-marriage, heteronormative society; economic struggles –were not unfamiliar to the ordinary female viewer.’’ 6

Desjardins goes on to discuss the 1952 comedy Dreamboat. The film stars Clifton Webb playing Thornton Sayre. Thornton is an English professor trying to keep quiet his silent era acting past, in which he played a character named Bruce Blaire. Dreamboat is a film containing a not-so-hidden gesture of toying with many effeminate film roles that its co-star Clifton Webb was known for taking on. Desjardins writes that it ‘’functions like a very sly wink about the charades of masculinity, for it suggests that heteronormative masculinity, of which virility is an assumed attribute, is just an act.’’ 7 However, what is interesting is that while Dreamboat reiterated expected feminine roles, it also has a wide selection of “gendered identity changes for Sayre/Blaire.’’ 8

We are also introduced to the reigning queen of the television sitcom: Lucille Ball. Truly beloved, I Love Lucy is one of the best examples of how stars are recycled into the present.

Recycled Stars looks at stardom, gender, and identity politics. The final chapter of the book strikes a contemporary chord. Desjardins brings up Meeting Two Queens by Cecilia Barriga--a powerful force in the New Queer Cinema. The video is broken down into different equally fascinating interpretations. Desjardins states: ‘’The responsive fan spectator is conceptualized in both historical and metapsychological terms; the video acknowledges the existence of a historical lesbian or bisexual audience and a spectatorial position–which presumably can be taken up by anyone–that is defined in terms of a fluid sexuality.’’ 9 The art piece discussed assumes while at the same time creates its own brand of lesbian bisexual zeitgeist in a very camp style. One of the most insightful statements included in the book is a quote by Lucretia Knapp who brings up the queer tone of the video: “The concept of transvestism is not as threatening to patriarchy as the image of the lesbian is, for transvestism still implies masculine privilege. However difficult she is to imagine, when a woman desires a woman, she is not a man.’’ Barriga’s selection of images of Garbo and Dietrich, attesting to the diversity and multiplicity of their role playing, seems to imagine that woman Knapp describes and confirms queer theory’s rejection of either/or gender choices and sexual performances. 10

Esinam Beckley is a writer and artist based in Montreal. She writes on a range of topics including art, film, feminism, and sexuality. She has been a contributor for spectacularoptical.ca since 2013. She is an exhibited artist who received formal training at Concordia University in the intermedia/cyberarts program. Her work explores aspects of identity and its constructs. She is a film enthusiast interested in cult and exploitation. She was the recipient of a Fantasia scholarship to the Miskatonic Institute and a volunteer at repertory cinema Blue Sunshine. Recently she attended film festivals in Germany, France, and Montreal. Currently she is working as a voice performer, and creative consultant on writer/director Douglas Buck's episode of Tales from Beyond the Pale which will premiere at the Fantasia Festival in July 2015.