By Jen Leigh Fisher No: 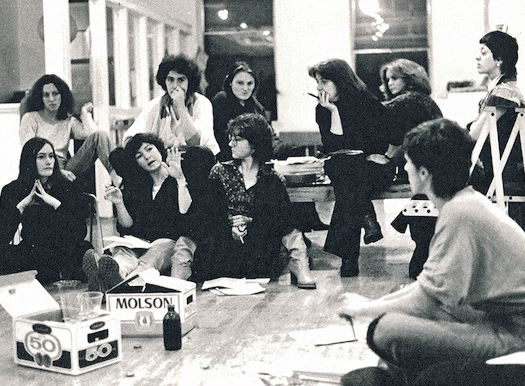 Forty years of feminist artistic practice at one of Montréal's oldest artist-run centres, will be commemorated in a special series of artist projects this spring. Jen Leigh Fisher discusses the impact of early feminist strategies on contemporary practice and questions the authority and status of history, the archive, the canon and even anti-canon. The year's 40th programming began with Dayna MacLeod's reperformance of Yoko Ono's 1964 work Cut Piece, continues with projects by Kirsten McCrae, Jenna McLellan, Wednesday Lupypciw, Cynthia Girard, Tanya Mars, k.g guttman, Anne-Marie Proulx, Anne Golden, Monique Moumblow, Noemi McComber, Sonja Zlatanova and many others. The series will culminate in a performative feast in which attendees are invited to come dressed in homage to their favorite feminist artist or artwork for the centre anniversary party on May 30th, 2014.

Over the course of 2014, La Centrale will present a series of activities to mark the 40th anniversary of Canada's first and longest continually operating feminist artist-run centre. This series aims to question the impact(s) of historical feminist strategies on contemporary artists.  Rather than fix histories in place, we approach the year with a set of questions about the impact of the past on present practices in ways that may be in turns playful, commemorative, confrontational, or decadently celebratory.

The vitality of the affective archive of feminist art history

We frequently describe La Centrale as a platform for contemporary art that is in dialogue with feminisms, but we function in continual conversation with wildly divergent histories of artistic practice, projects, manifestos, protests, performance, texts and exhibitions. Through our archives, traces of this history are all around us. We are surrounded by documentary material and more intangibly, by a legacy of references, returns, re-enactments that find expression in art works. These traces and returns trigger the question: what is our responsibility to such a history?

La Centrale invited member artists and Montréal-based artists with a history of presenting work at La Centrale to submit proposals for special projects relating to its 40th anniversary and archive. These activities could range from small gestures, round tables, artist/curator/writer interventions or reactivations of our archive that seek to create, mark and renew our understanding of how the past is continually acting on feminist art in the present.

What makes the marking of La Centrale's forty-year history different than the celebration of the history of other centres of equivalent long standing is that art by women and feminist art have an unstable and problematic status in relation to the making of history itself. Part of what always compelled me about the upheaval wrought by feminist artists was their renunciation of the modernist trope of the autonomous male heroic artist. This figure was removed from ordinary life, communicating his singular genius, marking out his place in the pantheon or canon of greatness (and thus art history), one transcendent work at a time. Instead, feminist artists repudiated this mythic figure and its power in art with a revolutionary mess of life, the body and new aesthetic relationships to the material world. This potent and relentless disruption continues to impact how artists are working today. The social and political context from which this art emerged is present today, even if many of its aesthetic processes have been absorbed by contemporary art.

However, the writing of official history relies on a canonical impulse. Many women artists in the 1970s and 1980s were drawn to collectives and the repudiation of not only the ideologies of modernist male dominated art, but also the systems of value and knowledge creation upon which patriarchal structures are based. During this period, women artists were expressing less interest in their own status as a single author of their work, and a strong desire to make the work according to their own priorities. La Centrale itself arose from artists gathering for discussions as a consciousness-raising group. What complicates the impulse to begin to list key exhibitions and star artists is that it is a canonical tendency that many early feminist artists sought to counter, frustrate and question.

The consequences of this rebellion against the authority of the canon in art and the modern ideal of a singular, autonomous, male artist, reveal themselves in unintended forms.

The women artists in that 1973 consciousness-raising group decided to take action and make a gallery for themselves when it became clear that the galleries and museums in the city were not going to give them any possible exhibitions.  As I am reading in the archives, the derisive newspaper reviews of art exhibitions of this time, such as ArtFemme75 (1975 seems so late), it is hard to take in, reading in 2014, the critic's utter disbelief in the possibility of a woman artist of value.

The relationship to history-making is always tenuous and contingent, because history has been written according to the structures and hierarchies in place at the time. Is this one of the ways that feminist practices do not fit well into established forms, literally and figuratively? Creating mess, instability, uncertainty and complexity - it is not hard to see why feminist impulses resist easy slotting into historical narrative, why feminist impulses resist, frustrate the recording to clear historical narrative about art.

We have a rich archive full of material, all the more striking because of what is missing. Books written about the history of art by women in Quebec in the 20th century are few and far between. Searches for academic articles on art by women in Quebec after 1960 result in shockingly few results, compared to the art historical writing about the equivalent activity in the rest of North America. This points to the value of our collection and puts a certain moral pressure on us as a centre and community to ensure that the material remain accessible to artists and researchers, and particularly, that artists can enter into dialogue with it and the potent imaginative charge that this history carries. 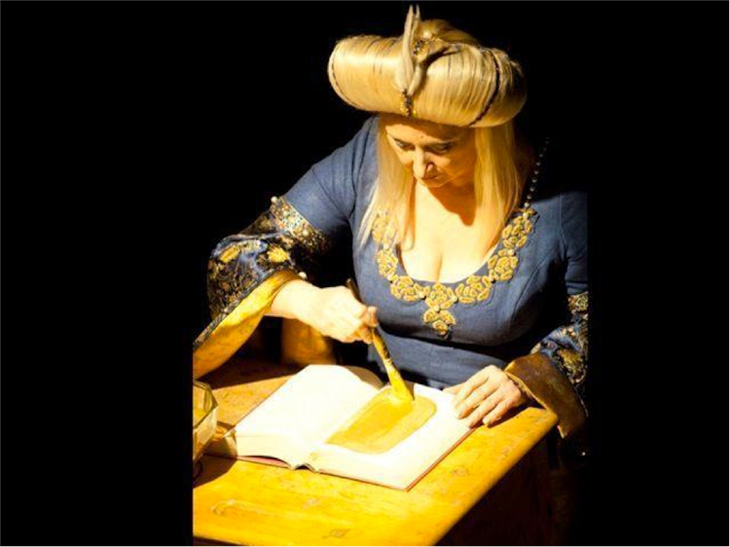 This spring the programming considers the impacts of historical feminist strategies on artists today. The programming was selected in response to key themes we wanted to consider. Cynthia Girard will collaborate with other artists to imagine, in the gallery space, political actions that should have occurred during La Centrale's history. Tanya Mars will present Homage to the City of Women: Leaves of Gold, in a performance in the gallery over two days, that considers how women were restricted in the past, from contributing to knowledge production. The exhibition Héritage will explore the status of craft, weaving and performativity with work by Jenna McLellan + Wednesday Lupypciw, followed by a residency entitled HotTopics Redux by Kirsten McCrae. Both of these projects respond to our interest in the impact of Feminist Canons or Anticanons. During this time, k.g guttman, Anne-Marie Proulx, Monique Moumblow and Anne Golden will explore the potential of Reanimating the Archive in research residency projects that will take multiple forms in and outside the gallery. This series culminates in a Performative Feast on May 30th, 2014.

This performative feast will honour La Centrale's past and those artists whose work, manifestos, and processes inspires our own. As part of this tribute to feminist art history, each guest is invited to costume themselves as a favorite feminist artist or artwork. There will be a costumed-procession, with giant cake, led by Noemi McComber, a feast created by Sonja Zlatanova in tribute to earlier artworks, and a photo booth to document the costumery.  The event will celebrate how important our personal heroes can be to our practices and that sharing these key inspirations is one of the most stimulating ways of sharing with other artists and community members we have. This way we will mark the night by keeping the anti-canon canon loose, playful, and reverential -  a decadently multiple chaos. This seems like the least authoritative and most ‘La Centrale’ way to go. This event will be followed by a dancing fundraiser at Sala Rosa the same night.

I invite you all to start planning your costumes now. 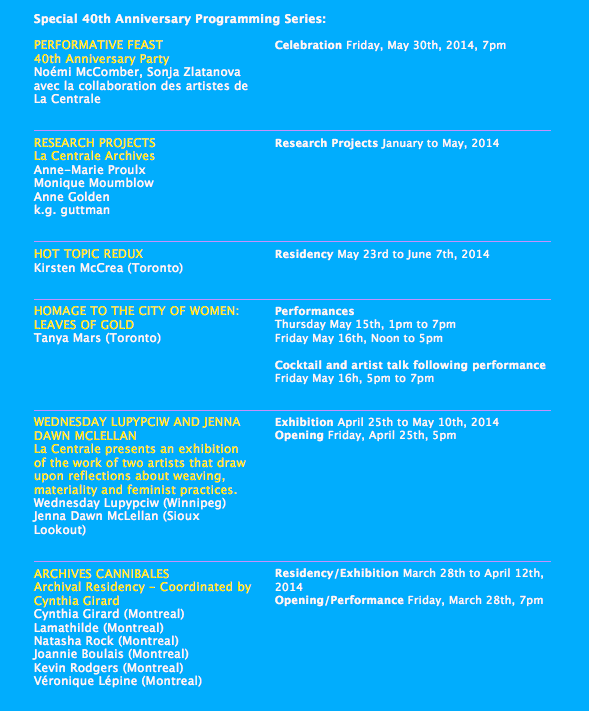 Jen Leigh Fisher is an artist, currently working as the artistic coordinator at La Centrale in Montréal. She studied art history at the University of Toronto, cinema at Ryerson and obtained a MFA from the University of Québec at Montréal. In addition to curatorial projects in media art, she has a practice in media installation and short experimental films, which have been presented across North America and Europe. She works predominantly with small-gauge film and her work deals with the limits of fragile systems, both artificial and in the natural world.