By Kate Durbin No:

Women as Objects began in 2011 when artist Kate Durbin began re-blogging images and text posts from teenage girls in real time in order to create an online archive gallery. Many of the images feature selfie-representation of the girls’ bodies as they would like the world to see them. Other images posted by the girls (often of women’s bodies) were culled from art history and popular culture and sometimes altered–rendering them more complicated than the source. The text posts include diary entries, rants, and jokes. The project is an exploration of what it means to come of age online. 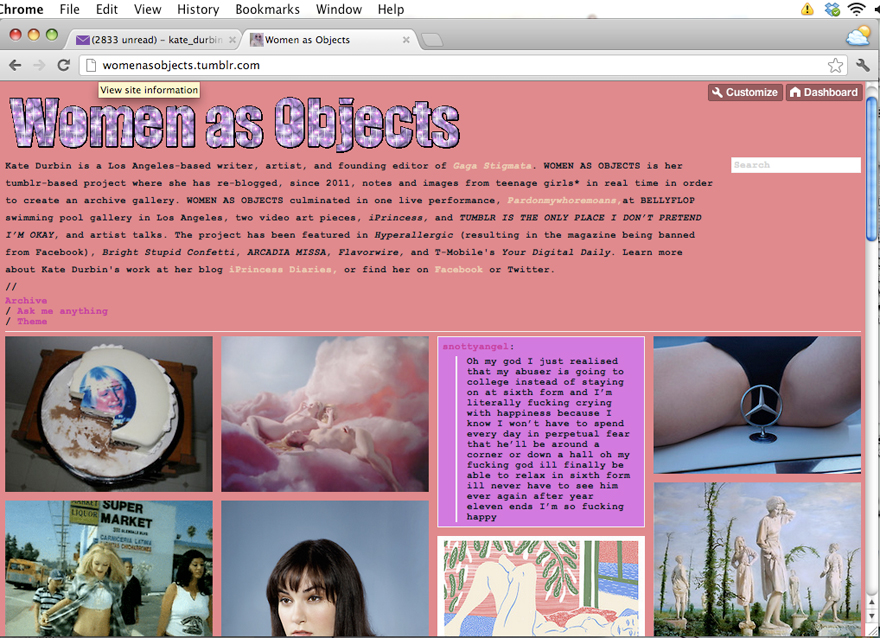 Kate Durbin is a Los Angeles-based artist and writer whose work focuses on women, digital media and popular culture. She is the author of The Ravenous Audience and E! Entertainment, and co-author of Abra, forthcoming as an iPad app and artist’s book with the help of a grant from Center for Book and Paper Arts at Columbia College Chicago. Kate is the founding editor of the online pop cultural criticism journal Gaga Stigmata, and her tumblr project, Women as Objects, archives the teen-girl tumblr aesthetic.