Towards the Revealing of the Guts behind the Pristine Interfaces: A future/past performative of the internet feminist imaginary (cyberfeminist archives)

By Miki Foster and Laurel Ptak No:

In the 1990s the internet of our desires seemed punctuated with disembodied lips, swirling math equations and spaces of possibility. The imagined transgressive cyberspace brimming with queer fantasies and hacker narratives allowed for the production of embodied desire: moving between surfaces, real and imagined, and beyond the internal frameworks of organs and implants, tissue and blood. Whereas this imagined internet functioned symbolically, conversationally and performatively, the internet of our reality came to be ruled by the interface—a soft white haze through which we willingly forsake the details of our intimate thoughts to megalithic corporations.

Artist Miki Foster presents a visual archive of this forgotten online past, one that imagined the internet as a space where cross sections of ambiguity and anonymity created gaps and distortions where liberation—or at least some kind of freedom—seemed possible. The project is an homage to the feminist internet and the theory that imagined it and is accompanied by a written interview in which curator Laurel Ptak engages the artist in a dialogue about the project. 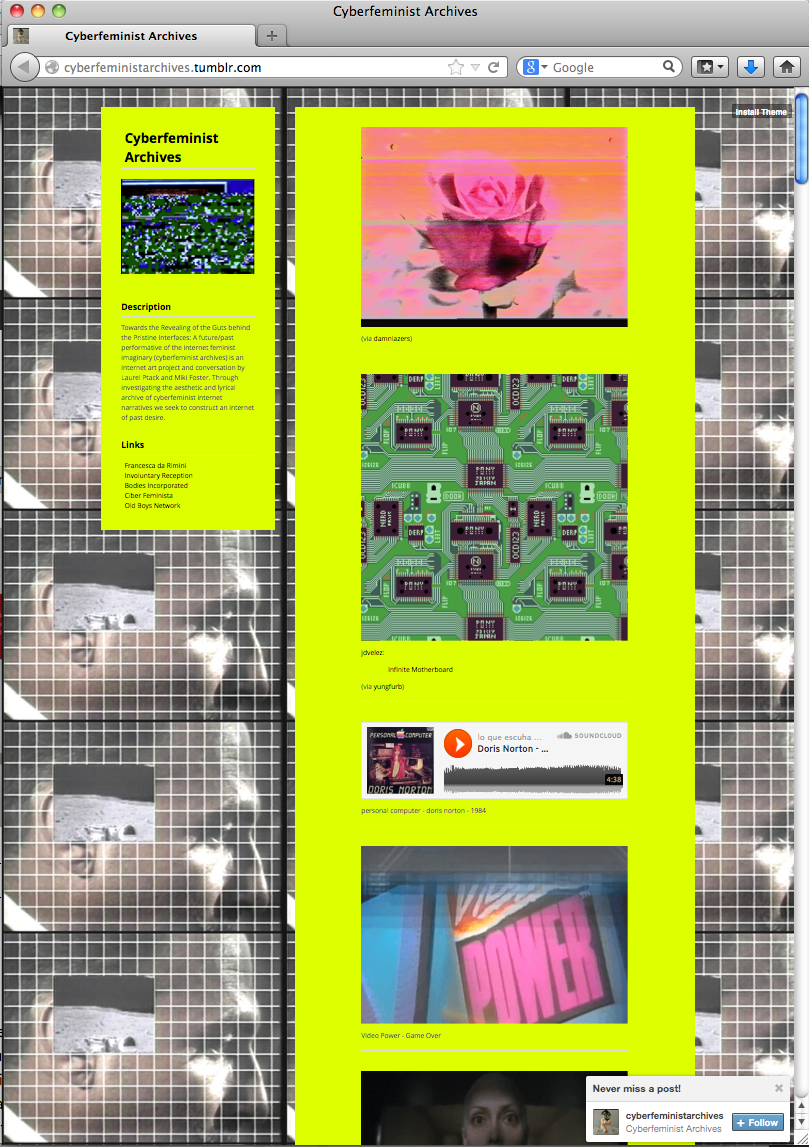 Miki Foster was born in 1984 in Northern California. Raised in the Seattle area she started organizing creative interventions and educational workshops while a teenager working with all-ages DIY venues. Her work as a performer, educator and installation artist has been featured at the National Queer Arts Festival, the Wing Luke Asian American Museum, the Museum of Art and History and DIY venues across the West Coast. She received a Bachelors of Arts in Liberal Arts from The Evergreen State College in 2007 and a Masters of Fine Arts in Digital Arts/New Media from the University of California Santa Cruz in 2009. She currently lives in Brooklyn, NY. http://mikifaux.com

Laurel Ptak is a curator whose work investigates social and political dimensions of technology and contemporary art. Based in New York City, she teaches in the Art, Media and Technology department at The New School and is as at-large curator for Tensta Konsthall in Stockholm. She is currently researching the history of cyberfeminist art practices since the early 1990s as a Fellow at Eyebeam. www.laurelptak.com