Son of a Patriarch

By Georges Jacotey No: 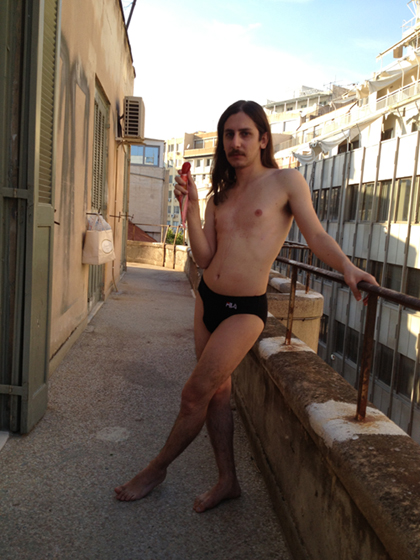 Son of a Patriarch is a performance developed alongside a body of research around the subjects of hegemonic masculinity and all the norms and representations constructed by years and years of the dominant patriarchy within most societies. Dominant visual and linguistic representations reinforce fixed binary gender identities and accepted behaviors (straight male – straight female), insidiously sustaining certain attitudes and hate-filled conditions within different societal structures: the feminine is regarded as negative and below par in relation to the masculine, calling a man gay is still a major insult, identifying as LGBTQ or even discussing anything that veers away from heterosexuality is on the verge of criminality or a criminal act in many places. By employing gender bending imagery, humor and popular culture, Son of a Patriarch is an attempt to break down the process of heteronormativity operating in our everyday lives.

Georges Jacotey (b.1987, Greece) is a new media and performance artist and the founder of #0000FF Gallery, the first online art gallery on Facebook. He studied Film Direction at the Aristotle University of Thessaloniki and has worked for the National Theatre of Northern Greece and the Greek National Television. His work has been exhibited in the Museum of the Moving Image in New York, the Photographers’ Gallery in London, the Art Gallery of Ontario in Toronto, the Gene Siskel Film Center in Chicago and Nikolaj Kunsthal in Copenhagen.