The Spectacle of the Tragedy 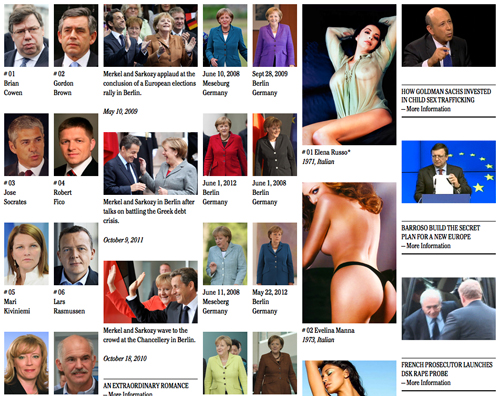 The Spectacle of the Tragedy tells a visual story about the politicians that navigate the Euro crisis. It shows us what is happening behind their political smiles and gives us an insight into their irresponsible behavior. The Euro was devised to bind countries, but today it rather seems to divide countries. Strong countries do not want to pay for the weaker countries in the South. Our European leaders try to secure an economically and politically unified system. To them, this seems the best way to create European trust and keep the economic engines running. However, the current political elite fails to involve citizens into their unclear system and does not realize what kind of fire they are playing with. By collecting and repurposing images taken from the fragmented and temporary news articles about the financial crisis, Noortje van Eekelen has created a database that presents itself to the public as a website. The website is a compilation about the European Show and its leading actors; at the same time it tells the story of the unmistakable destruction of the Euro as a result of obscure financial operations and human failure.

The Spectacle of Tragedy