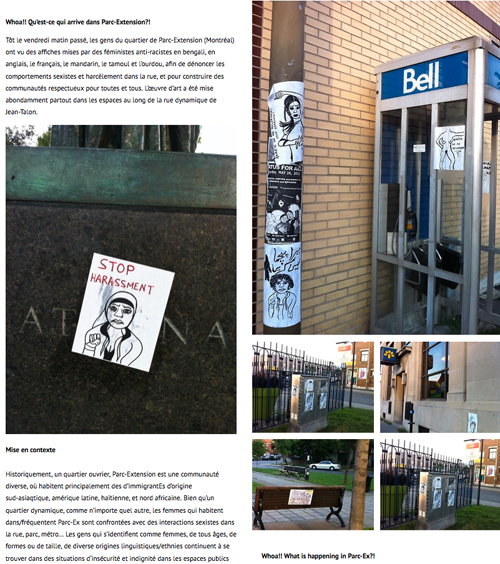 On an early Friday morning in July 2012, shop keepers, workers, residents and passers-by of Parc-Extension neighbourhood (in Montreal) woke up to fierce feminist posters with pointed messaging in Bangla, English, French, Mandarin, Tamil, and Urdu.  This guerilla art action was not publically claimed by any group, but a photo-essay on a tumblr site indicates that the artwork was abundantly plastered in spaces along the busy Jean Talon street by self-identified anti-racist feminists in order to “denounce sexist behavior and street harassment, and to build safe, dignified and healthy communities for all.”

The photo-essay on the tumblr site contextualised the action by stating that this was part of the ongoing grassroots organising that people are engaged in so as to end interpersonal and state violence in Parc-Extension, a working class neighborhood, and home to a diverse  immigrant community, composed in large part of South Asian, Latin@, Haitian, and North African migrants.  State-violence such as poverty, racial profiling by the Montreal police (SPVM), as well as Canadian Border Service Agents (CBSA) detaining and deporting members of the community is wide-spread in this vibrant neighborhood.  According to the site, in fighting against this brutality, these activists also recognised the importance of fighting against street-harassment in the ‘hood.  They also conveyed that a safe community means that all people feel they can walk the streets with dignity and without fear.

Non c'est non - No means No