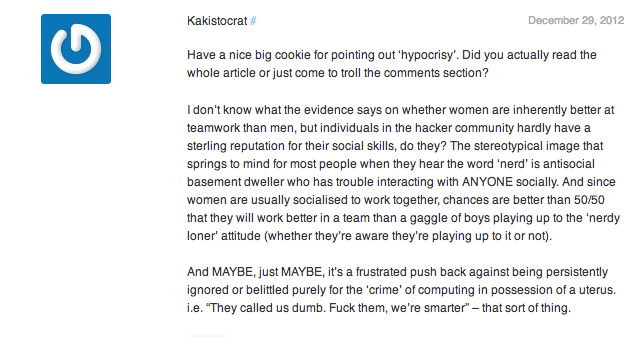 The above comments were made on hacktivist Asher Wolf’s blog, in which she gives a detailed account of the gendered harassment that eventually led her to resign from the CryptoParty she helped create.

Outrage, trolling, support : the reactions to her blog post featured voices from every recess of the Internet. When it comes to sexism within hacker communities, a lot of people have a lot to say.

While the debate is vital to resolving what is undeniably a problem, how does the type of rhetoric used in such discussions hinder or help the cause?

Does acknowledging differences in gendered constructions reinforce latent stereotypes? On the other hand, does discussing sexism in a gender-neutral way gloss over the issue or allow us to transcend the gendered discrimination that lies at the root of the problem?