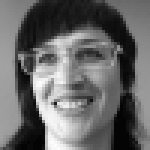 Corina MacDonald is an information specialist, developer, DJ and music producer. She completed a Masters degree in Library and Information Studies in 2008 at McGill University, with a specialization in knowledge management. Her professional interests include the role of open content, technologies and standards in community and capacity building, systems of knowledge representation, electronic publishing and digital heritage. She worked as a heritage information analyst at the Canadian Heritage Information Network from 2008 to 2010 before beginning work as an independent consultant for digital cultural projects. Under her musical alias Cyan she hosts the radio program modular systems on CKUT 90.3 FM. She has been actively involved in Montreal’s independent electronic music community since the late 1990s and was a founding member of collectives phoniq, Women on Wax MTL and dark disco. She has blogged and written about digital art, music, and information practices for Vague Terrain, Artengine, art press 2, Leonardo and other scholarly and professional journals.