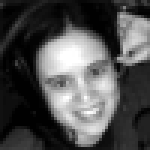 Candace Mooers has worked in alternative media since 1995. Writing zines, hosting community radio shows, and organizing all-ages punk concerts, have all figured part of her DIY counter-cultural ethic. Her art practice explores gendered divisions of labour and digital cultures of communication via the mediums of embroidery, scavenged objects, and paper. She is a former President of the National Campus and Community Radio Association, past Executive Director of Gallery Connexion (Fredericton) and past Production Coordinator for The HTMlles 10: Feminist Festival of Media Arts + Digital Culture, produced by Studio XX (Montreal). In 2010, she co-founded the G20 Alternative Media Centre in Toronto, a temporary autonomous workspace for over 100 independent journalists to cover the protests from social justice perspectives. She earned a Bachelor of Arts in History and French Literature at the University of New Brunswick and studied in the Joint Graduate Program in Communication and Culture at York and Ryerson Universities.